Dating VOX products can be very difficult. VOX did not observe or utilize standard dating procedures nor does the serial numbers, or cosmetic features on VOX products represent any concrete dating information which we are aware of. Many VOX products have been modified or canablized over the years so accurate dating can be impossible.  The VOX Story by Dick Denny and David Petersen has a good dating list by features in the appendices and  the book "vox amplifiers The JMJ years".

Because the Vox name has been used by such a variety of companies in
different locations, no lists of serial numbers are available. Even so,
certain characteristics can help narrow the date of manufacture to within a
year or so. These characteristics can be applied to most amplifier models
prior to 1985

* No change due to emphasis on solid-state. 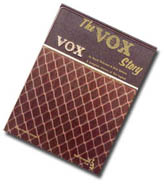