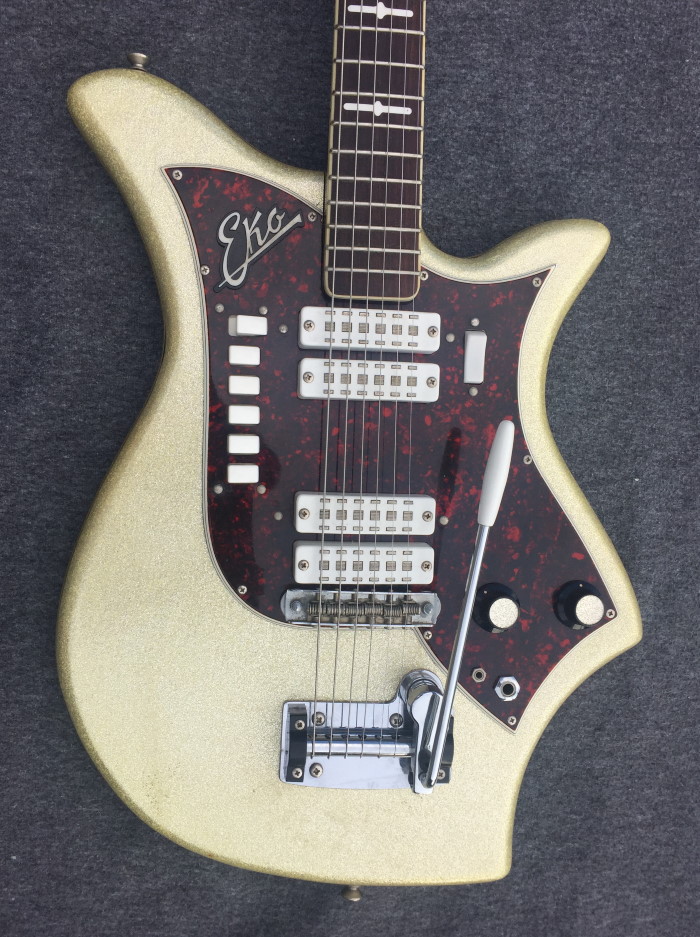 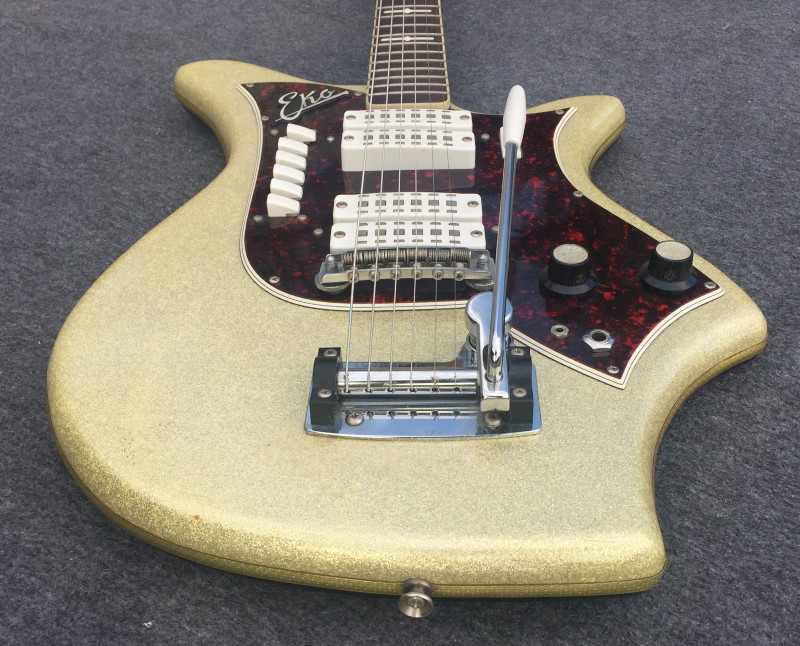 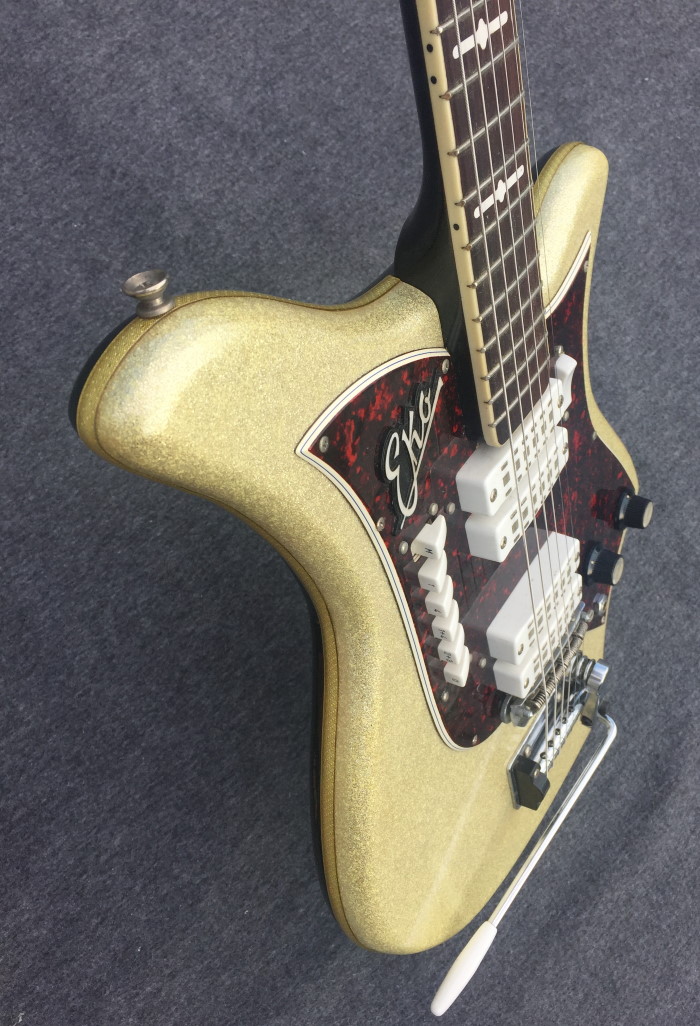 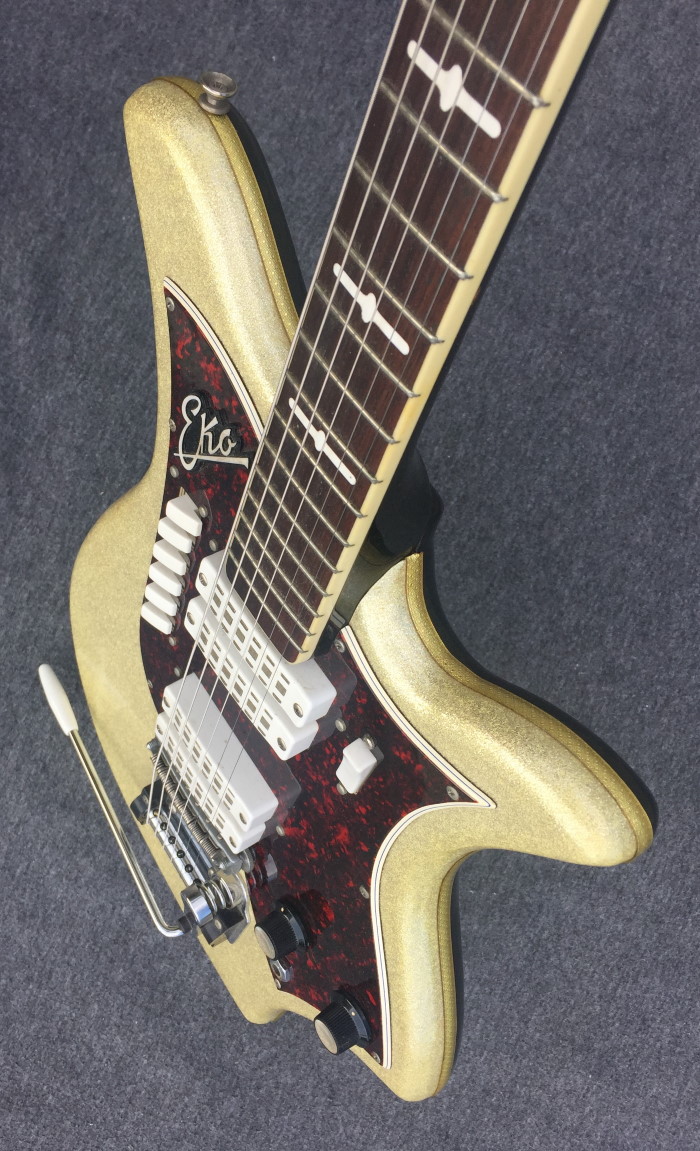 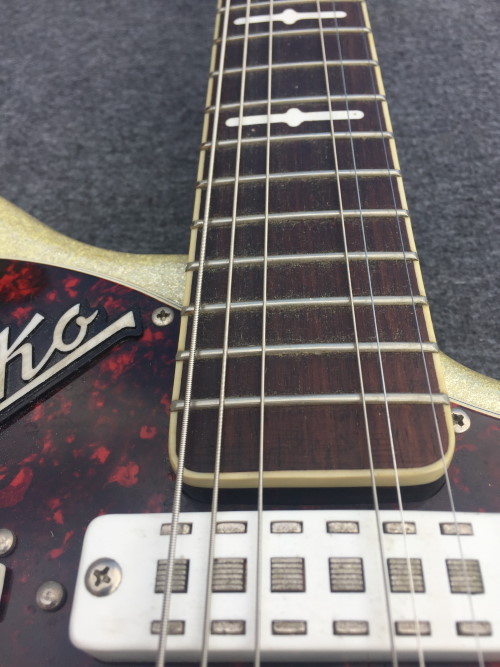 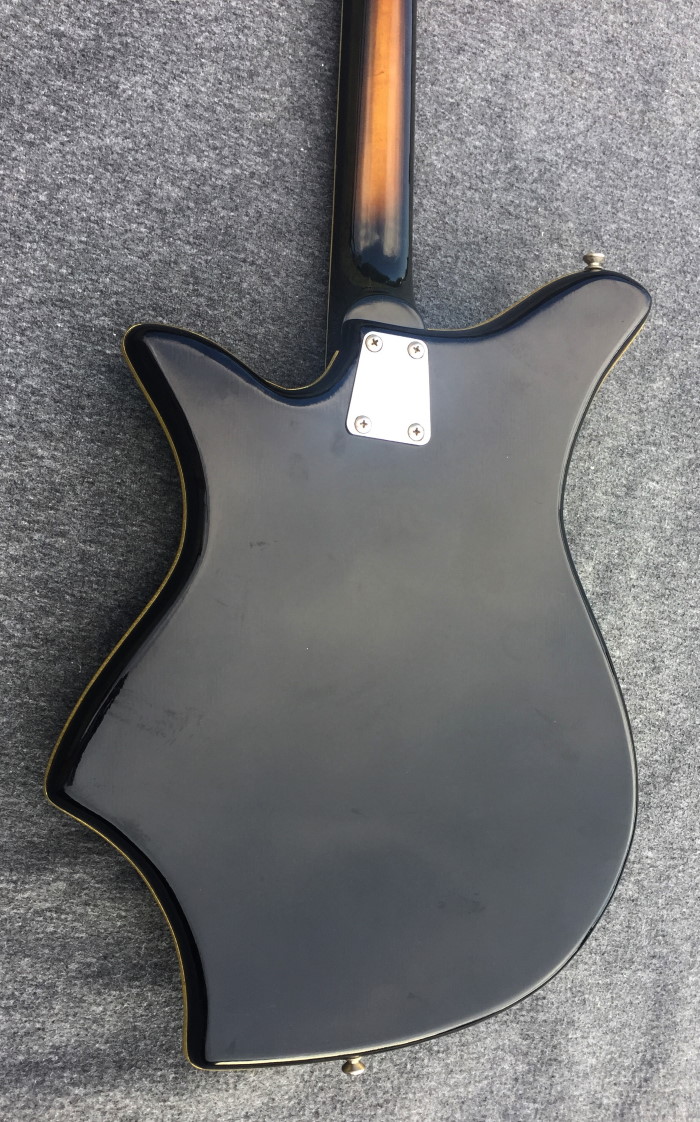 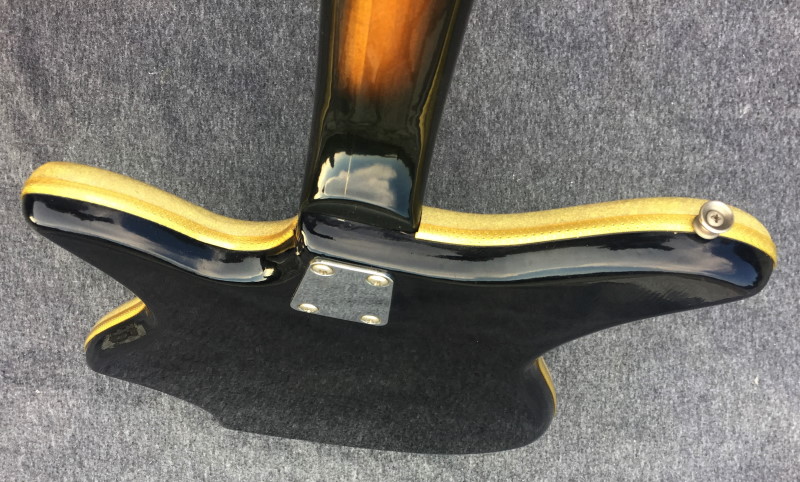 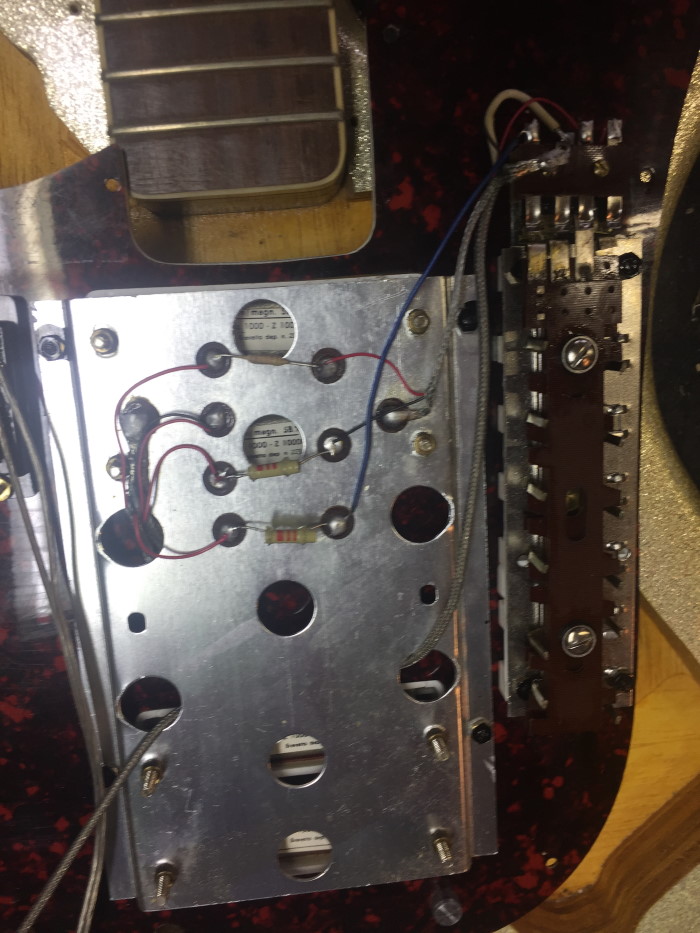 Perfect condition near mint. Nice neck with good frets ..only the first five with more obvious signs of wear but playable.

The design of the three missing shoulders is a classic of the Italian industry of the 1960s. Almost all manufacturers had one in their catalog and originally that small handle allowed you to play seated while maintaining the classic setting with the neck tilted upwards. In an era of complexes and long hair, it soon became an indispensable stylistic innovation, the "Ultra Modern Shape preferred by Professionals". In the United States, the third cutaway is called, not without irony, the shark-bit, and it was used by National in '62 to shape the body of the Glenwood 99 like the map of the USA.
The Eko 700 went into production in '61 and was launched in style at the Milan Fair in '62 with the first color catalog. Everything betrays spatial inspiration. These are the years of the conquest of space, of Sputnik and of course the Stratocaster. On the keyboard there are the flying saucer shaped markers characteristic of the entire first Eko production. At the same time, the Wandré Oval, the UFO of Pioli, the Moon-shaped Spazial of Crucianelli and the Rokes rocket were born. Most of the production was covered with plastic. The back of the black or mother-of-pearl body matched the available front coverings which were red, blue, silver and gold beads, white mother-of-pearl and, finally, hazelnut: a disturbing imitation of the wood grain. With the latter option, the back of the body was covered with a fluorescent imitation of the briar and the handle was often finished with a brindle purple. On some specimens the type of plastic "spaghetti Bolognese" already seen on other models was also used. 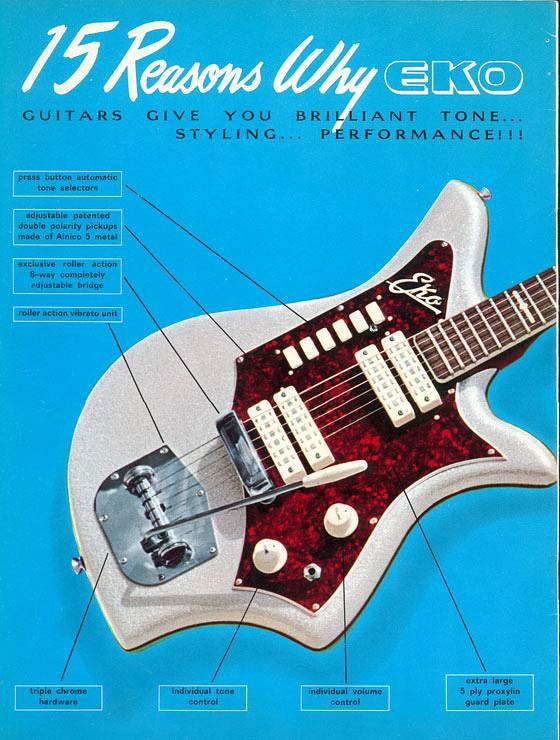 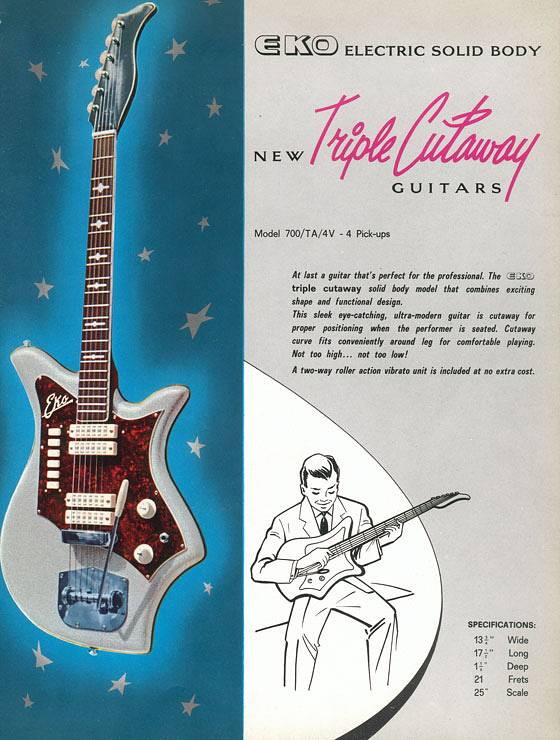 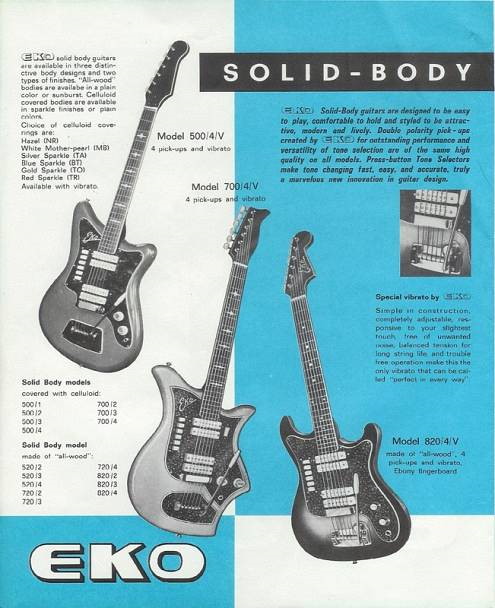