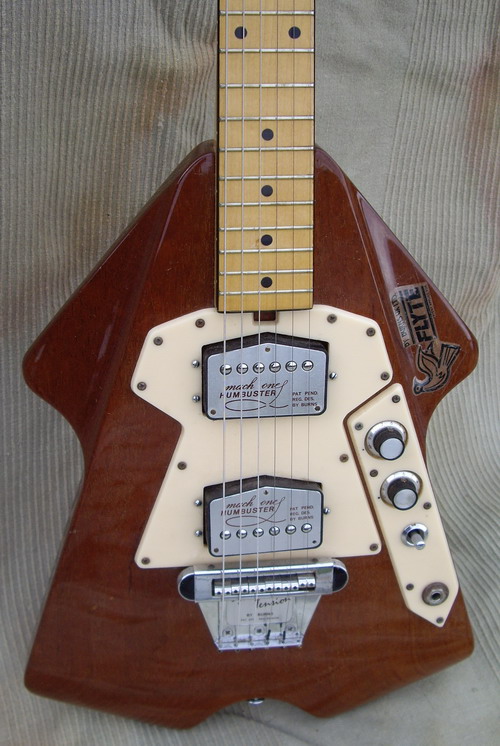 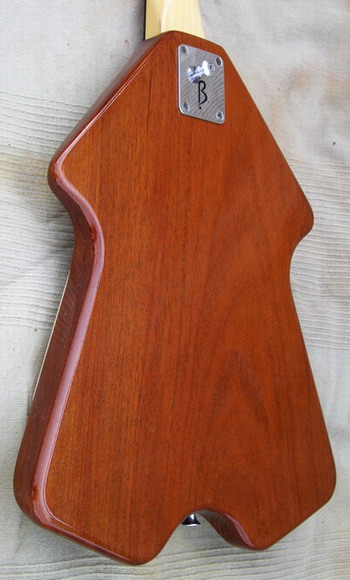 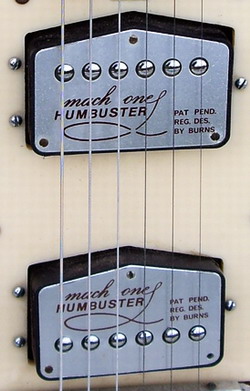 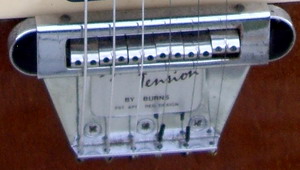 Burns UK appeared in 1974 and lasted until 1977.[5] Burns UK guitars were not made in London, but instead were manufactured close to Newcastle upon Tyne in Jim Burns' native north east. Only one guitar model sold well, The Flyte, which was originally to be named the Conchorde, after the supersonic plane, because of its shape. Its design proved popular among glam rock performers of the time, such as Slade and Marc Bolan.[6] They were also used at the time by Australian band Sherbet, most notably on their "Life... Is For Living" album, where they were acknowledged on the back sleeve liner notes. Despite their unconventional design (which often added to the production cost), the guitars had a rather conventional sound, and again Burns ceased to produce guitars--but not before of few examples of the Burns Mirage, the successor to the Flyte, had been produced.

Burns is most famous for the guitars he created before selling his business to Baldwin Piano and Organ Co. in 1965, including the Bison, Hank Marvin, and Jazz Split Sound (with the Wild Dog setting. But his career continued, off and on, until his death in 1998, and along the way he left a number of curious instruments, including this stealth-shaped ca. 1976 Burns Flyte.
But it wasn’t stealth aircraft that inspired the Burns Flyte, rather it was the supersonic transport (SST) – the “Concorde.” The Concorde was conceived in ’62 and begun as a joint project of the U.K. and French governments. The maiden voyages of the first Rolls Royce-powered prototypes occurred in 1969, and in January ’76 the first commercial flights commenced, to great media fanfare (and environmentalist protest due to its extreme volume). Indeed, the Flyte was originally to be called the Conchorde, although it’s not known if any were ever produced under this name.The Flyte was Burns’ first design under his own name after he sold the business to Baldwin. In between, he worked for Dallas Arbiter, which produced his Hayman line of guitars in the early ’70s.Following the demise of that company, in ’73 Burns hooked up with an outfit in Newcastle and began to work on guitars to be sold with the brand name “Burns UK Ltd.” There, the Conchorde/Flyte was developed and introduced in ’74. Basically, the guitars were made by Shergold and the electronics by Re-An.Coming at the height of the “copy era,” the Burns Flyte was a pretty radical design for 1974. Its symmetrical, bi-level, swept-wing body styling and sharply pointed head were truly supersonic. The body was mahogany, the bolt-on neck maple. At least some of the fingerboards were, oddly enough, ebonized maple. The Flyte was outfitted with twin Mach One Humbuster humbuckers with unusual five-sided metal covers.Building on some of Burns’ ’60s ideas, the Flyte had a Dynamic Tension bridge assembly with individually height adjustable saddles on a bridge plate. These came in several shades of silver, white, natural, and even with Union Jack graphics.

Last week I opined about my penchant for unusual, not to say, ugly guitars like the Fenton-Weill Tux-master from England. Now, I don’t mean to throw (rolling) stones—the States has produced its share of butt-ugly guitars—but Merry Old England has contributed mightily to the cause. And even though he’s revered in the U.K. as their very own Leo Fender, Jim Burns has had a hand in more than a few guitar models that might crack a mirror if they could see themselves. One case in point: the Burns Flyte.
Now, the Burns Flyte is definitely a step up from the Tux-master, but not such a very big one. James Ormston Burns (1925-1998) began designing guitars in around 1958 when he made a short scale Supersound guitar for the musician Ike Isaacs. In 1959 Burns teamed up with Henry Weill to form the Burns-Weill company, producing the rather ungainly forebears of last month’s featured Tux-master. Burns and Weills apparently weren’t a match made in heaven and they had parted ways before the year was out. In 1960 Burns struck out on his own, founding Burns London Ltd. And putting out what’s now a legendary line of soldibody electric guitars.
Probably the most famous feature on Burns guitars of the 1960s was the setting called “Wild Dog” on the Bison and some other models. I can remember not being able to wait to plug in mine when I got it. Wild Dog!! A snarl? Growl? Sharp bark? Imagine my disappointment when I learned that Wild Dog was simply a somewhat weak phase-reversal effect like you get in-between pickups on a Strat! Now there was the marketing department run amok!
Burns guitars quickly won the hearts of British guitar players…there were, indeed, few other quality options. Plus, they arrived at just about the time that teenagers were trading in their Skiffle washboards for their first electric guitars in order to play that new music from the Colonies.
Meanwhile, in the former Colonies, guitars—especially electrics—had become hot commodities among the young. And there were lots of young folks, the Post-War Baby Boomers, hitting the right age to become a “market.” Savvy businessmen wanted in on the gold mine. Companies as diverse as Norlin (a brewing conglomerate) and CBS (TV, movies, and records) started buying guitar companies (Gibson and Fender, respectively).
Into the corporate feeding frenzy jumped the Baldwin Piano and Organ Company. At least it was in the musical instrument business to begin with! Initially Baldwin was a bidder for Fender, but lost out to CBS. On the rebound, Baldwin set its eyes on Burns of London and in 1965 began importing Baldwin-badged versions of Jim Burns’ guitars.
However, Baldwin’s affair with Burns was relatively short-lived. In 1966 Baldwin struck a deal to purchase Gretsch and they proved to be much better sellers in the U.S. marketplace. Baldwin held on to the Burns property until closing it down in 1970.
Burns wasn’t through with guitars yet. From 1969 to 1973 Burns manufactured Hayman guitars for the music distributor Dallas-Arbiter. As part of the agreement, Jim Burns couldn’t use the Burns of London name, but somehow Burns UK was acceptable and Burns resumed making guitar in Newcastle upon Tyne in 1974. Which brings us to the Flyte.
The Flyte—originally supposed to be the Concorde (or Conchorde)—coincided with the debut of supersonic aviation. Hence the swept-wing appearance. If you appreciated weird guitarflesh, this should tickle your fancy. I keep looking at it it just keeps getting weirder, and in an especially good way! Those pickups are called Mach One Humbusters. The Dynamic Tension bridge is pretty interesting…well, no, it’s not. It’s just weird. Indeed, much like Hayman guitars before it, Flytes were well made and pretty unremarkable except for the eccentric appearance.
Apparently, Burns UK Flytes were played by so-called Glam Rockers like the band Slade and Mark Bolan (who made a career of eccentric guitars, among other things). Wikipedia lists other Flyte players, but I’ve never heard of any of them, not that that signifies anything. But, you have to stretch to find Flyte fans; they never did take off.
I have no idea how many Flytes were produced, but I suspect production quantities were not enormous. They were only made for about 2 years. In around 1977 Burns UK introduced the Mirage to replace the Flyte, with re-designed Mach Two pickups. Burns UK then bit the dust.
Jim Burns gave guitars one more go with the oddly named enterprise “Jim Burns Actualizers Ltd.” From 1979-83, but that met with even less success than Burns UK and the Flyte.
Still, you have to give Burns high marks for chutzpah and if your taste, like mine, runs to the unusual, you should be sure to catch a Flyte the next time one come your way! 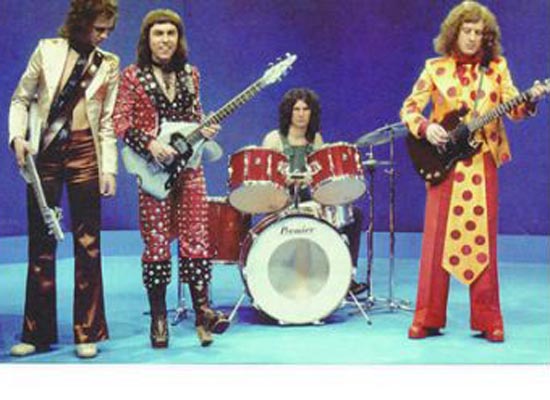 Dave and Jim were both given Burns Flyte instruments, around the same time that Marc Bolan was seen with one..
It is believed that Dave later sold his on (as he tends to do with any endorsement guitars he is given).
What happened to Jim's Burns Flyte bass is not known. 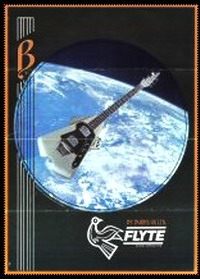 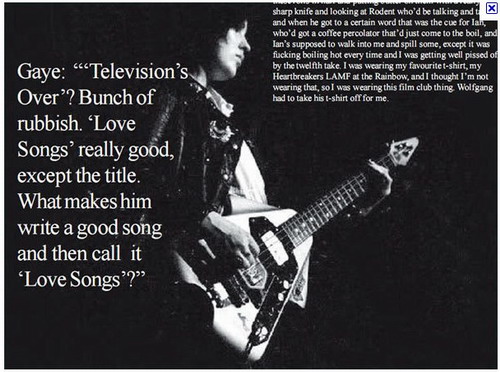 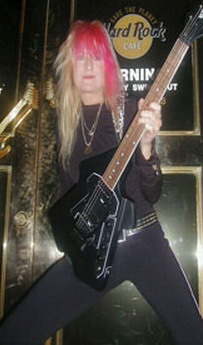 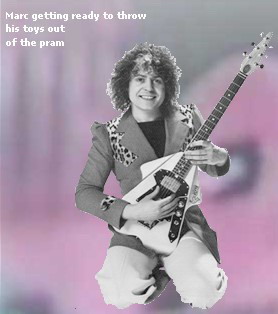 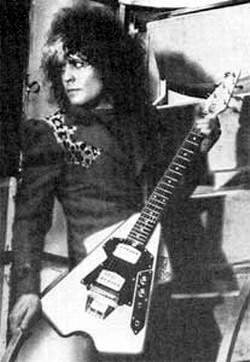 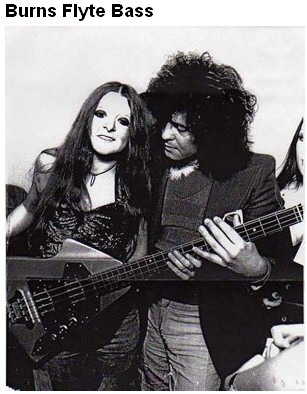 London Boys & Telegram Sam TX: 21 February 1976
On 17 February 1976, T.Rex performed new versions of London Boys and Telegram Sam. For the former, Marc performed atop a revolving Perspex stage; for the latter, he emerged – a little unsteadily - from a make-believe rocket. For both he was sporting a bleached streak at the front of his hair and toting a Burns Flyte guitar.Bolan seems to have struck a deal with the guitar manufacturers as he was also featured in the Daily Mirror, giving the guitar away in a competition. The relationship was presumably short-lived as Bolan flung the instrument from the stage at the end of London Boys. 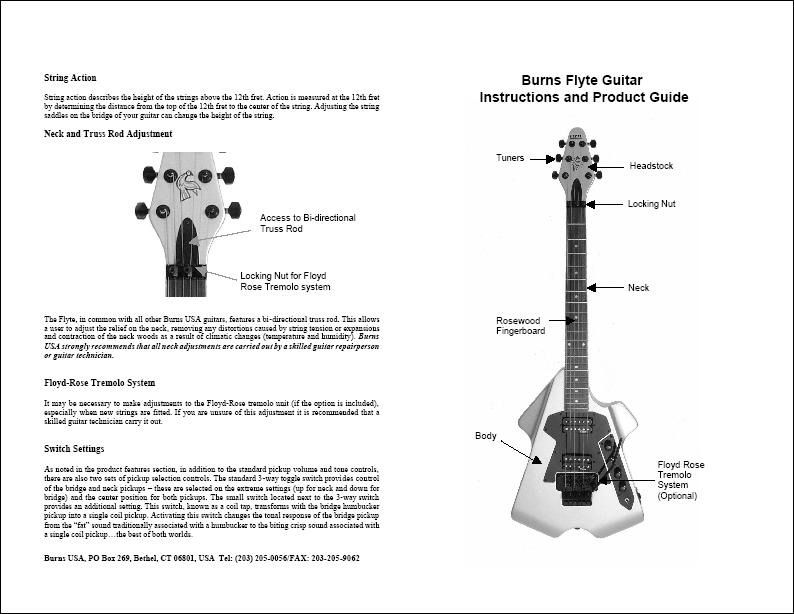 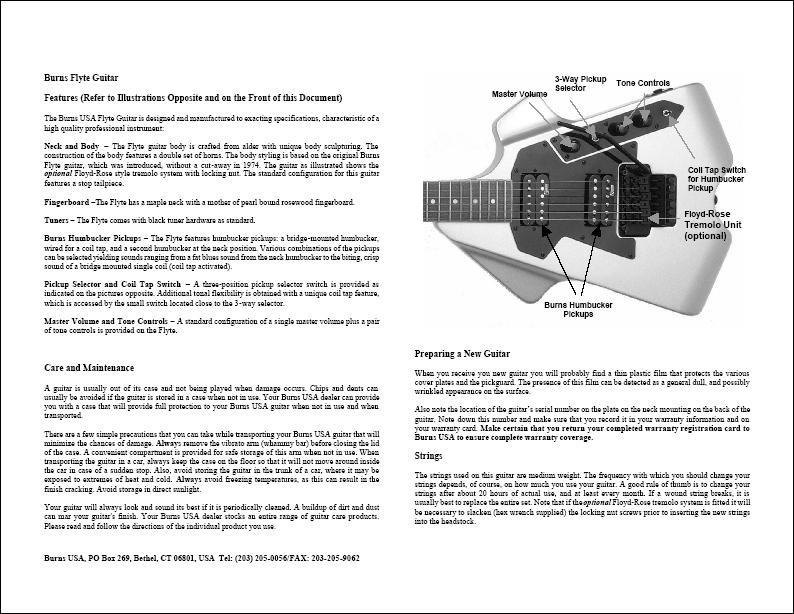