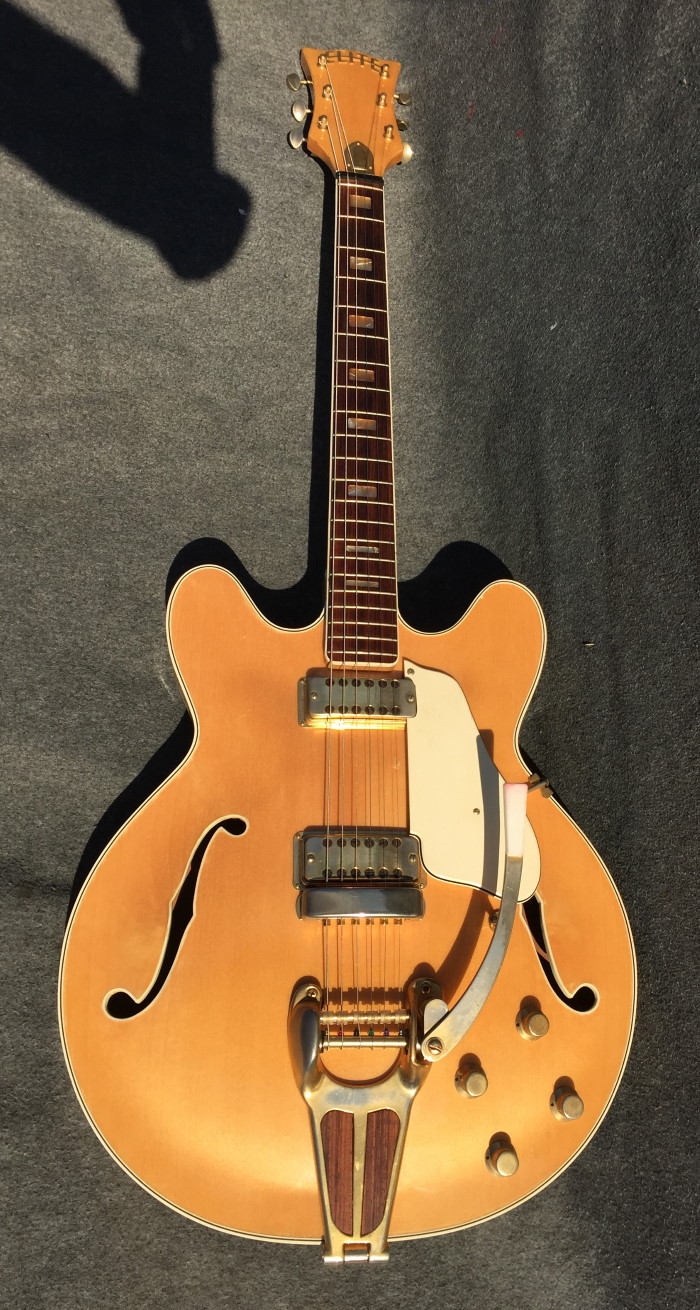 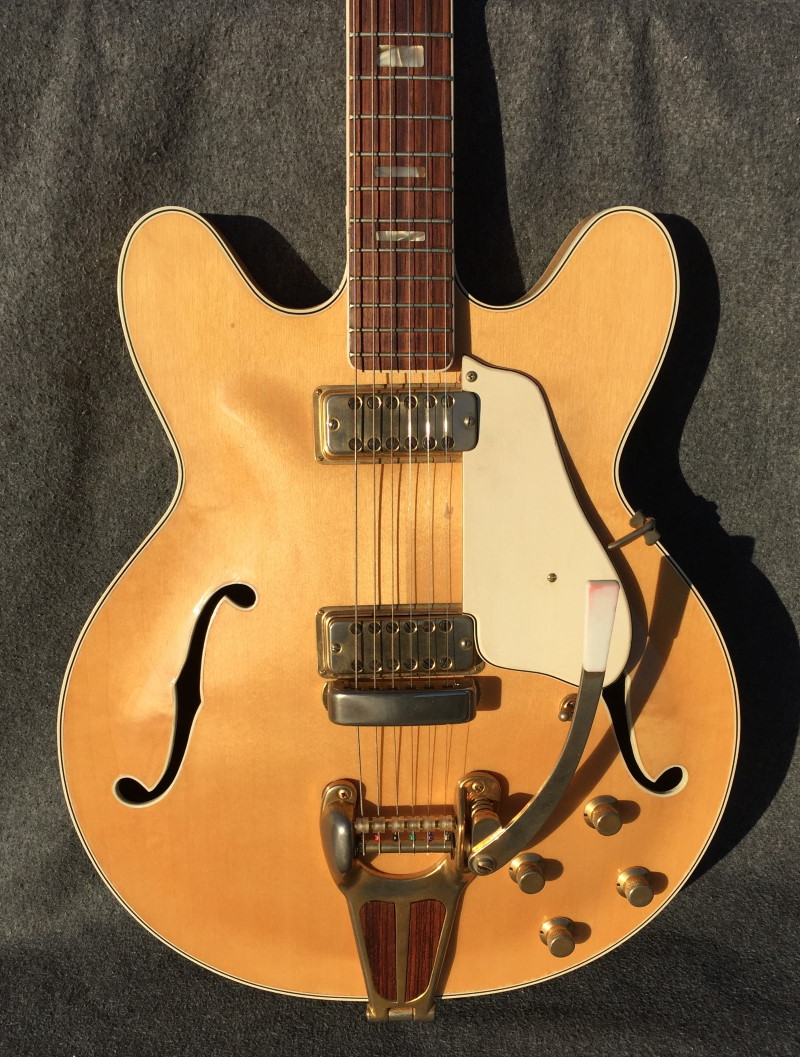 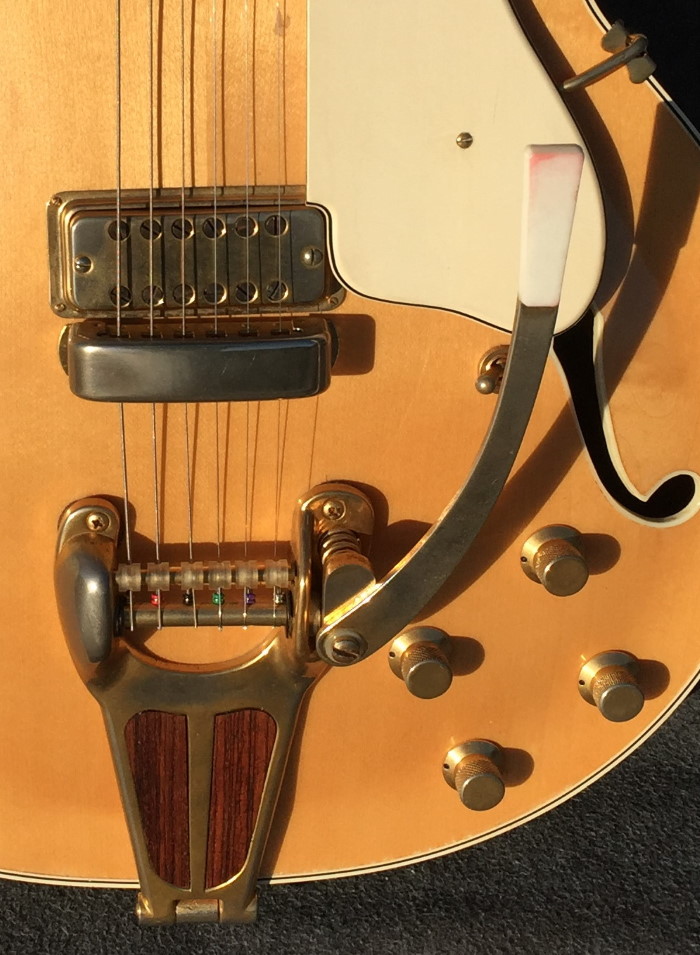 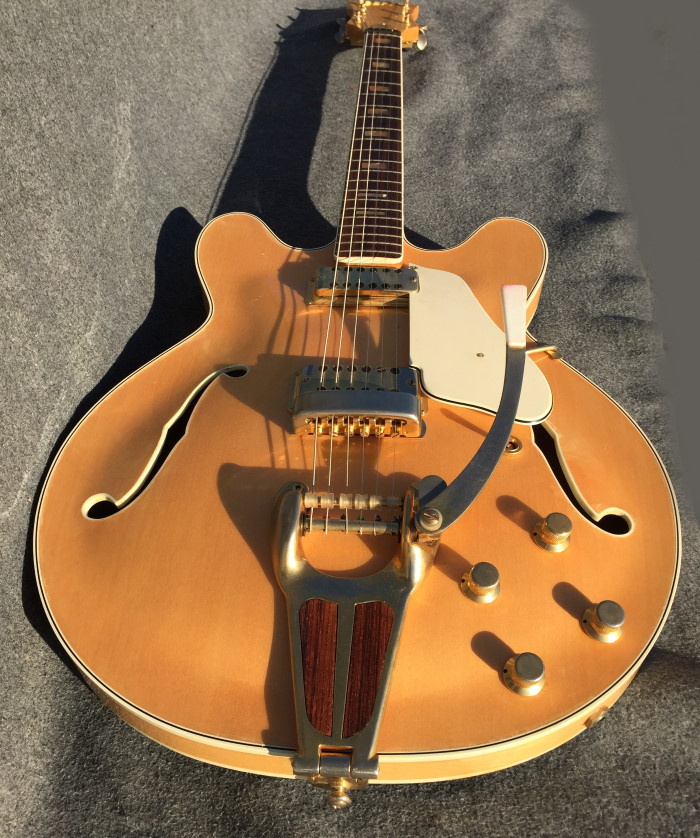 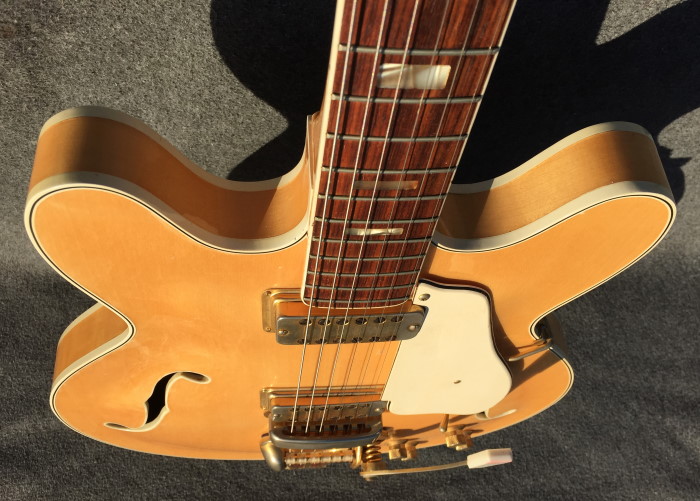 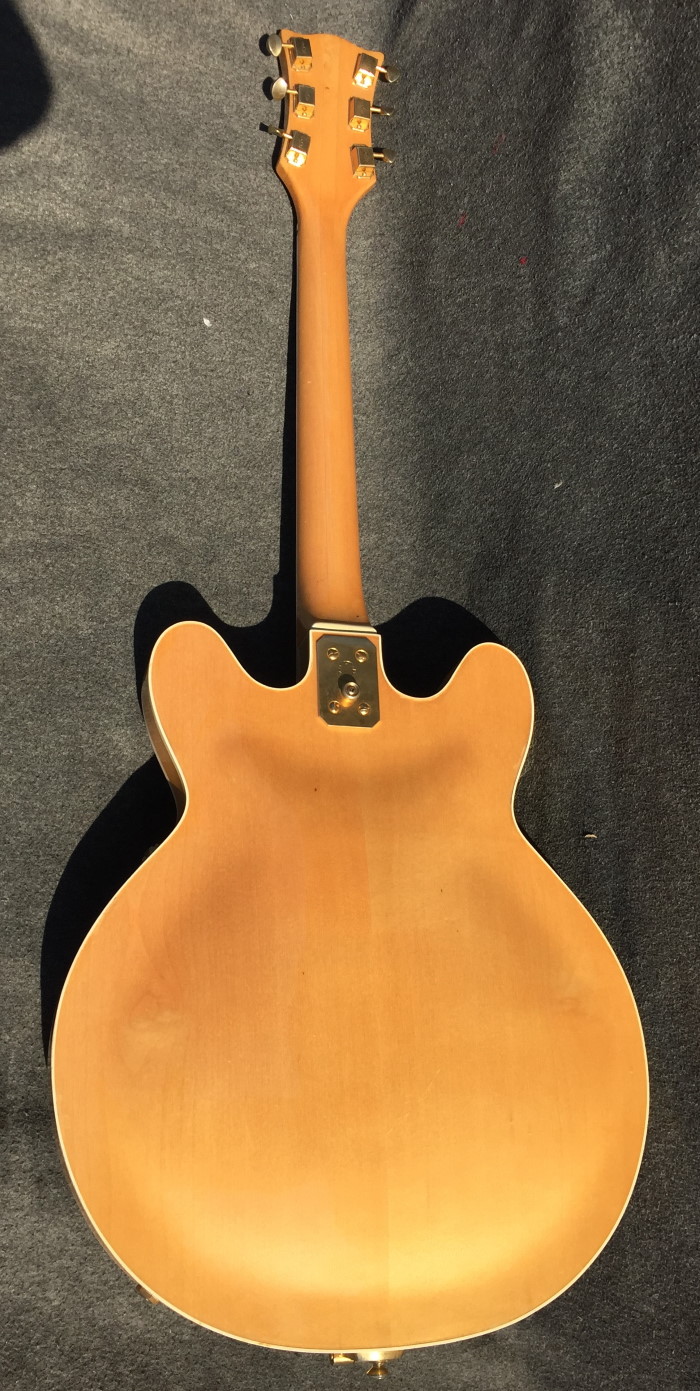 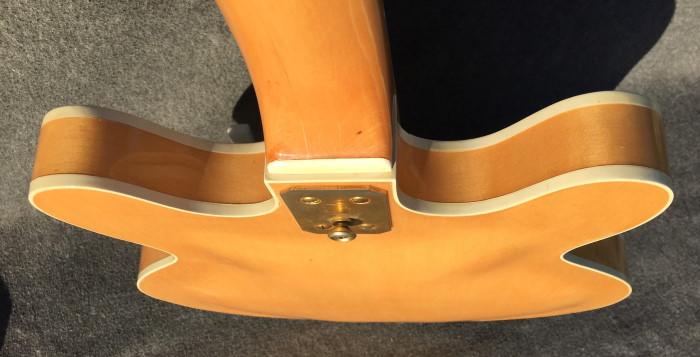 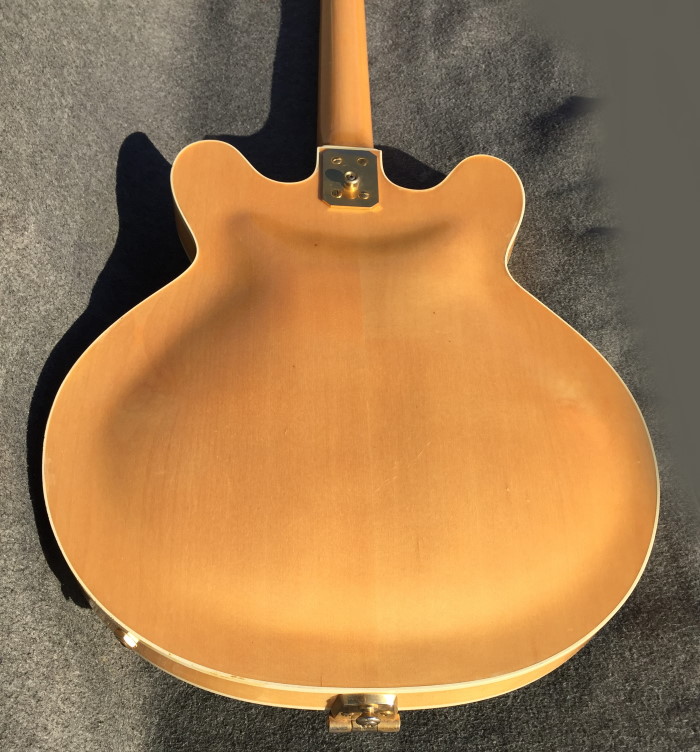 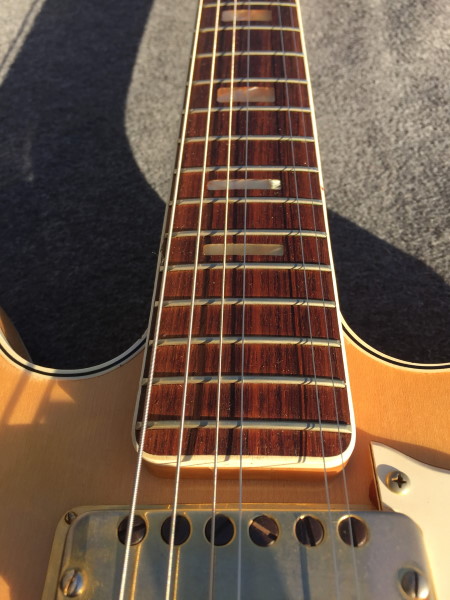 A rare model in near mint condition, witout wear , very nice neck with good frets..ready to play Come with Hard Case. The Crucianelli company were the selected manufacturer for the VOX  brand in Italy during the 1960s and 70s. Alongside the Vox brand they also produced their own top of the line instruments featuring many of the Vox Style features.

The Crucianelli company was founded in 1888 in Castelfidardo by Sante Crucianelli, a former partner of Paolo Soprani and also a pioneer of the regional accordion industry.Facing the crisis that hit the sector in the early 60′s the company diversified its business in guitar manufacturing following Oliviero Pigini’s example with his Eko company.The relationship to Eko determines Crucianelli’s whole guitar history. During the glitter celluloid era of the first half-decade the two companies are in tough competition, for every Eko model comes out a matching Crucianelli instrument. From 1965 on both companies increasingly specializes in its own field, Eko focuses on acoustics and solidbodies, Crucianelli on semi-acoustics, and both cooperate with Vox. Technical contributions of Eko and Crucianelli melt together on certain Vox (and even Eko ) models. Olivieri Pigini was planning a merger of both companies’ guitar operations. His sudden death in 1967 didn’t allow the project come to reality. On the international market any six-stringed thing with a colourful plastic coating is called an Eko. Crucianelli guitars are very often confused with Eko and sold as such. Those guitars seldom confess readily their true origine, they hide inside a maze of brandnames. Some belonged to Crucianelli, especially Élite and the rarer names Elli-Sound and Custom Built. There were brandnames given by the official American distributors, PANaramic (by PANcordion Inc., NYC a accordion company from Ernest F. Deffner.) and Tonemaster (by The Imperial Accordion Co., Chicago), more or less special models supplied in contract manufacturing to big OEMs like Vox and Baldwin, there were the brands applied by American traders such as España, Ardsley, FH, and a crowd of minor U.S. distributors.

The Beatles and the Mersey Beat boom of 1963-64 were a giant step ahead for the music — and a step backwards as far as gear is concerned. All of a sudden the high tech solidbody guitar fell out of fashion for being too strongly associated with early 60′s instrumental rock music (The Shadows and Spotnicks in Europe, Dick Dale and the surf music in the U.S.).

The British invasion bands favoured old dual cutaway semis made by Gretsch, Harmony, Epiphone, Rickenbacker, when not a real Gibson like Eric Clapton in his Cream era. Even bass players wanted to go semi-acoustic, which gave fully unexpected exposure to some European brands (McCartney and his Höfner, Bill Wyman and his Framus). For all makers issuing an ES-335 copy became an unescapable obligation. In 1964 the Stratocaster popularity was peaking; in 1967 production was almost discontinued. Meanwhile even Fender had to introduce a 335 copy of its own, the Coronado.

The most experienced in that field among European makers were supposed to be the German, but their guitars looked a bit too special to make convincing 335 copies. The Eko 285/Barracuda still was too definitely Eko -like. Japanese models were still flat out clumsy. Even the U.S. made Harmony and Kay suffered an amateur image. Crucianelli was one of the few european producers able to offer a sensible price-to-quality ratio along with the reasonably pro look that was in demand. Unlike Hagström’s world famous Viking range, Crucianelli’s ES-335-copies are scarcely visible, being scattered as usual over many brands. They were nevertheless produced by thousands, under the names Vox, Tonemaster, Baldwin (bodies only), España, FH, Élite and even (a dire rarity in the electric range)…Elite Crucianelli!

The 335 hype wasn’t merely a matter of fashion, there were also some practical reasons behind it. For young people getting a noble piece of nearly traditional craftmanship as a Christmas present was far easier than extorting from Mum & Dad some equally expensive crazy sparkle plastic covered shape. A skilled musician who wanted to make a living in mainstream music or enter a jazz band would have been unwelcomed with his Wandré or Eko -700, an ES-335 styled guitar made it easier. Furthermore these guitars allowed home use without the back then so expensive amplifier. The semi-hollowbodies’ tendency to feedback wasn’t a problem due to the poor amp power available at that time. On the contrary, allowing a bit of feedback helped the specific resonance that typified lead guitar sound in mid-60′s pop music. Around 1969-70 the sudden availability of high power amplification paved the way to the LesPaul dictatorship, putting a brutal end to the semi-acoustic’s era of dominance — and to Crucianelli’s guitar operations as well.