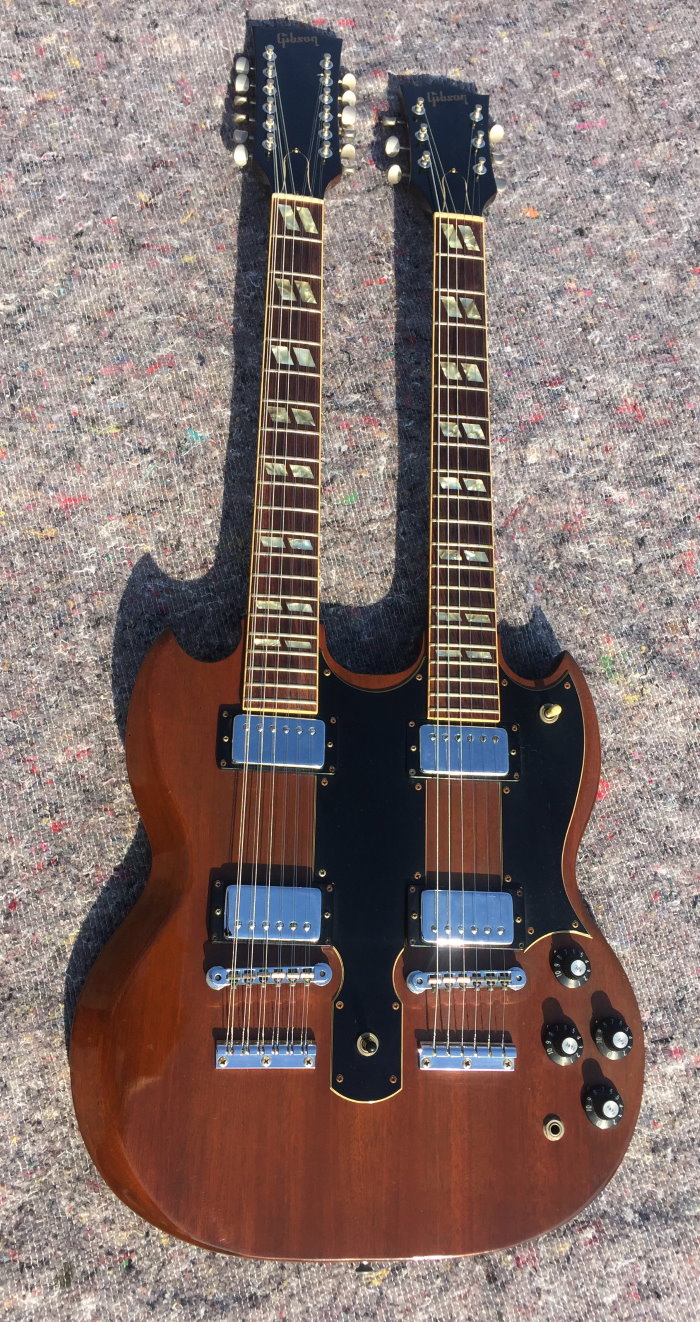 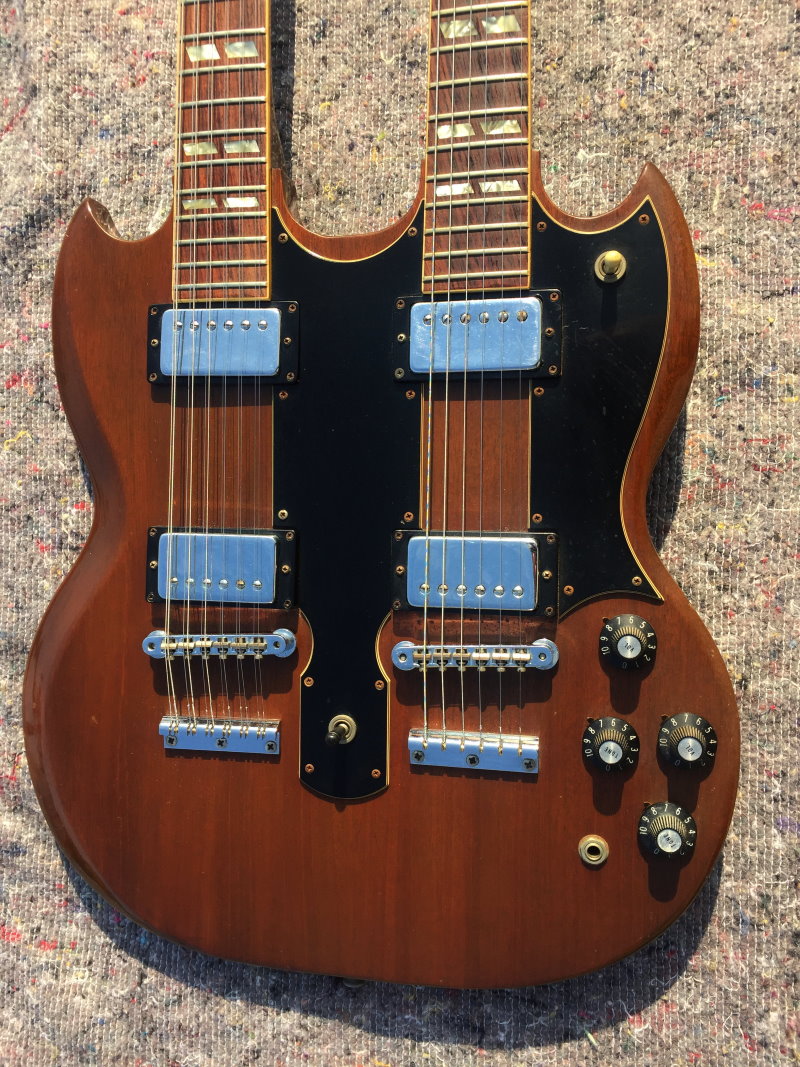 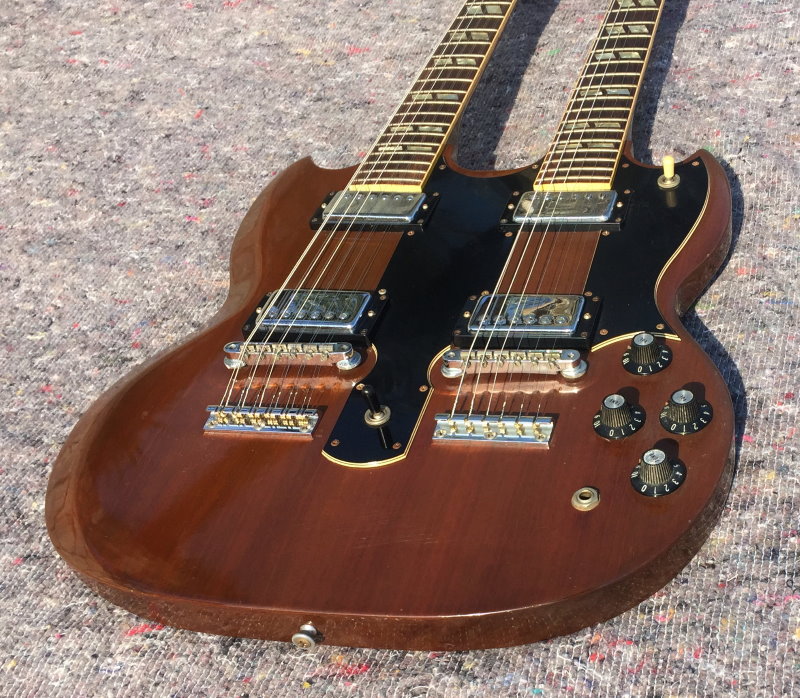 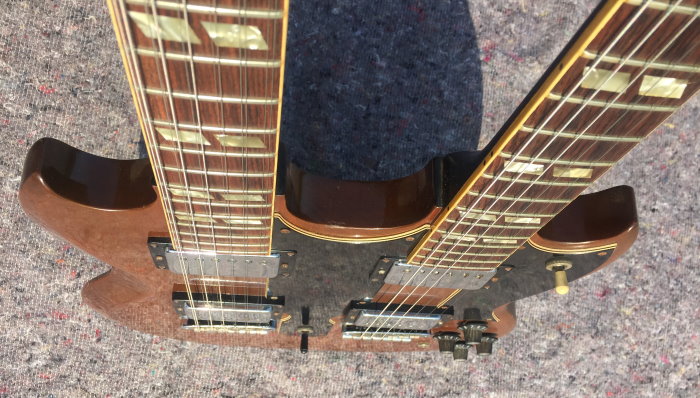 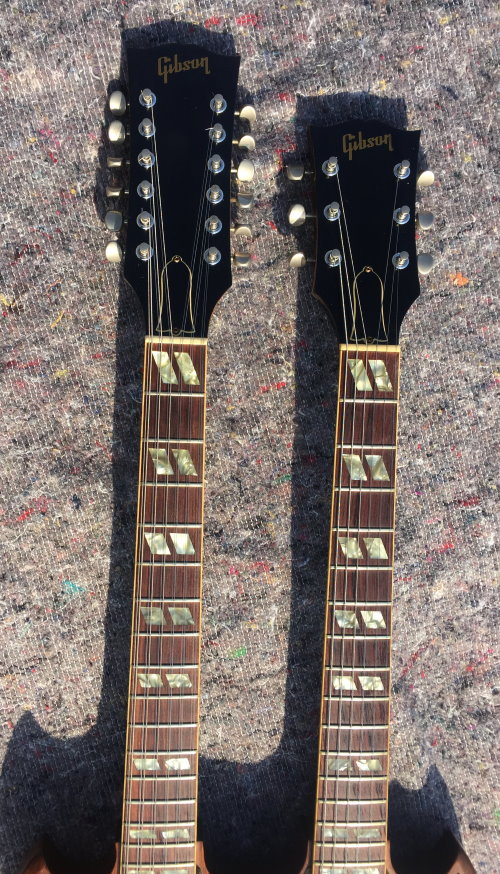 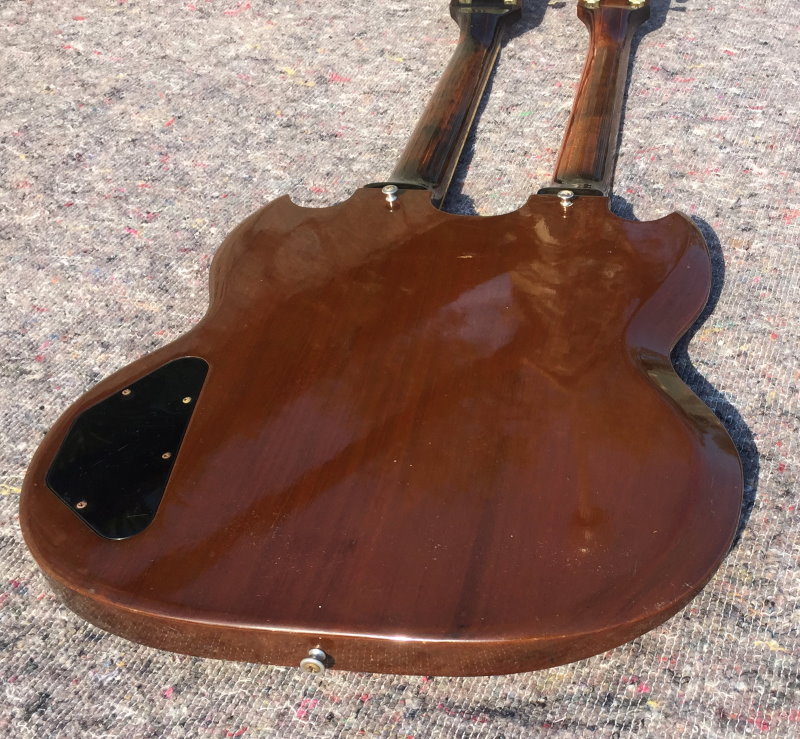 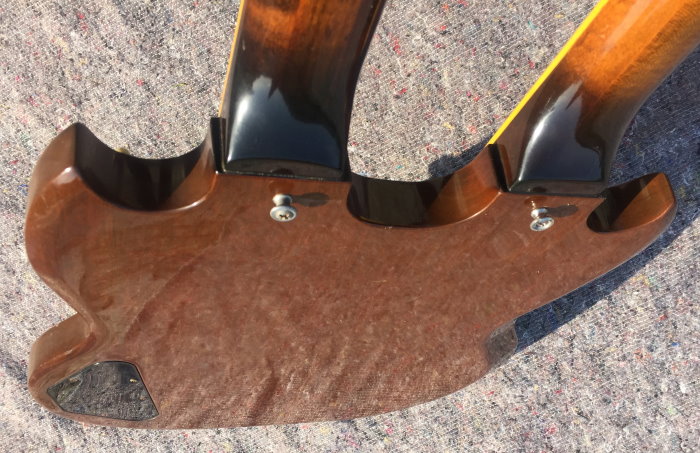 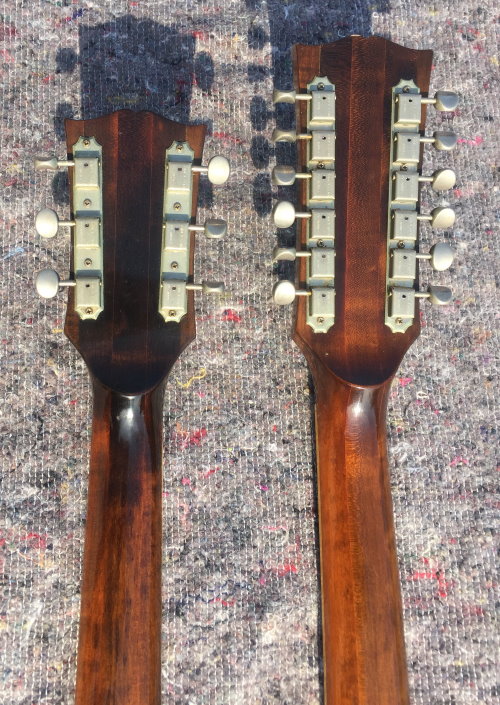 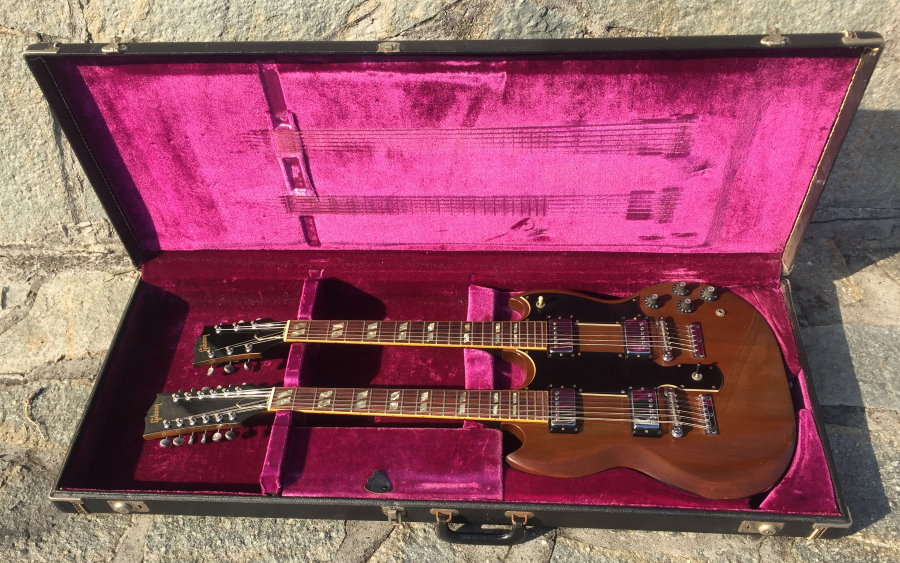 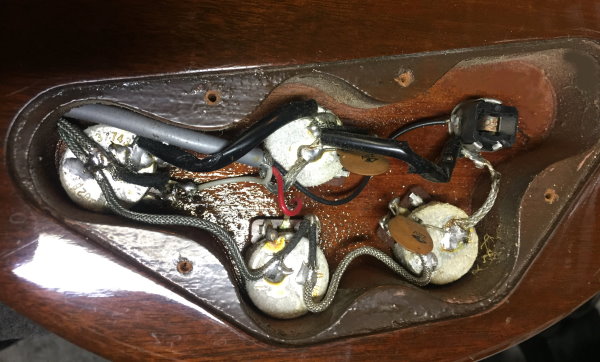 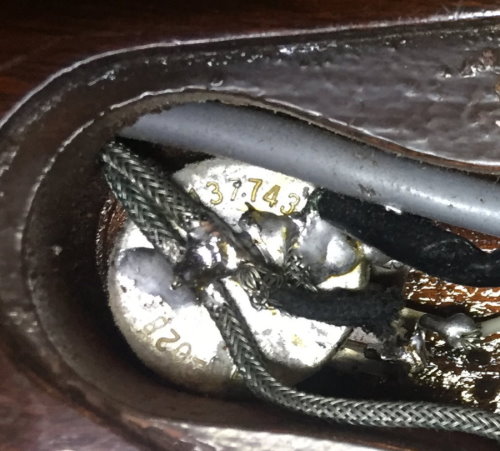 Rare in beautiful walnut original finish with pearl headstock logo. Made in Kalamazoo
Original Gibson 1275 case. 6 & 12 sound amazing. Beautiful Parallelogram neck inlay. In the late 1970's the Gibson Double 12 was more popular than it had ever been-or ever would be again! The bridges are the Patent Number  also the Gibson HB Pickups. Original Kluson tuners. Original Frets in excellent conditions. An excellent piece of Gibson history.This is an excellent player, not as heavy as some with very low comfortable action on both necks. The condition is simply amazing very clean and all original. Come with original case.
Jimmy Page is the classic example but John McLaughlin really showcased the versatility (Guitar Player 50 Great tones of all time).For the collector, investor & stage

Double-neck Gibsons are wild and wonderful by nature. A top attraction in any guitar freak show, they cry out for a second look. The guitar (originally named “The Double Twelve”) made its way onto the market in 1958 alongside fellow before-their-time Gibson revolutionaries The Explorer and The Flying V. The Double Twelve stands out as the first double-neck guitar ever produced on a commercial basis by a major manufacturer. Having been made famous in the hands of Led Zeppelin’s Jimmy Page (who used one live to traverse the guitar parts in “Stairway to Heaven”), The Mahavishnu Orchestra’s John McLaughlin (who many credit with popularizing the instrument), and The Eagles’ Don Felder (who launched into “Hotel California” in concert with one of these babies in hand), the double-neck Gibson smacks of the best in ’70s rock and roll. (Prior to the ’70s, the EDS-1275 — as The Double 12 would later be renamed — first picked up cache when it was played by Pete Townshend during a number of Who gigs, two of Earl Hooker’s album covers, and strummed by Elvis Presley in the movie Spinout.) The instrument is both retro and modern and at a strange crossroads between magnificently dynamic and just plain outlandish. In more recent decades, plenty more boldfaced names have embraced it for its on-stage versatility and stage presence — including Rush’s Alex Lifeson, KISS’s Ace Frehley, Yes’ Steve Howe, Elton John’s Davey Johnstone, Slash and Zakk Wylde. In 2008, a Gigwise.com reader poll determined that the EDS-1275 is The Coolest Guitar in Rock. We like to think so. 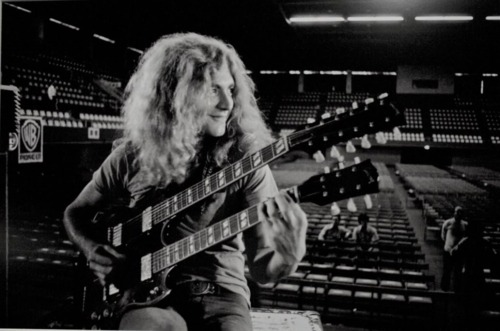 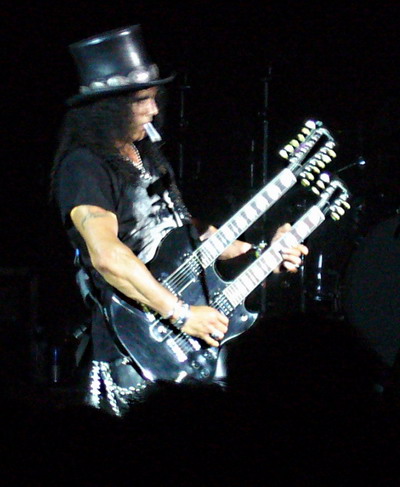 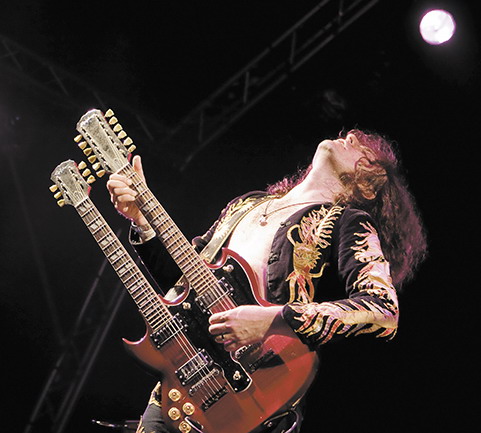 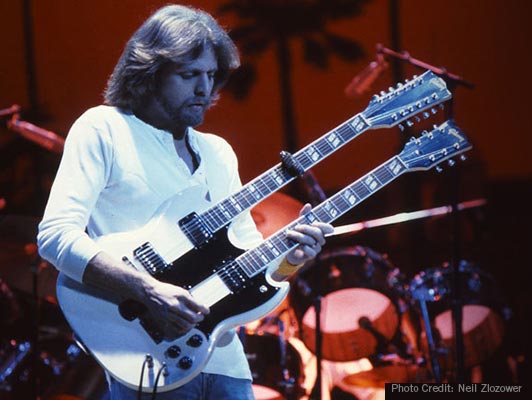 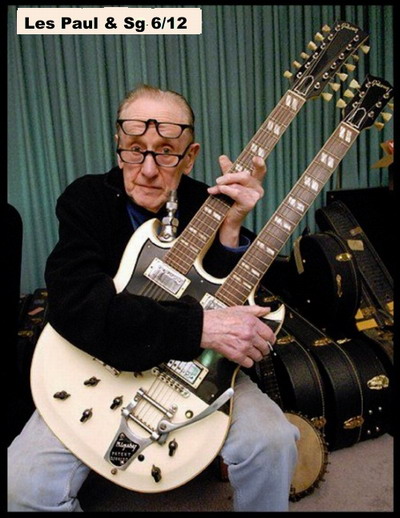 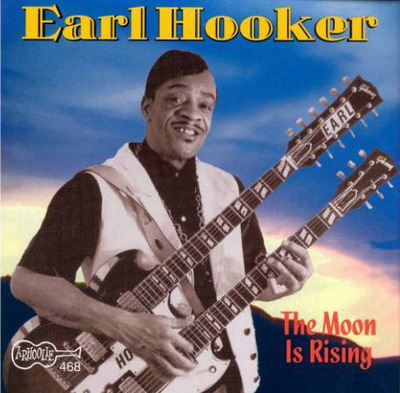 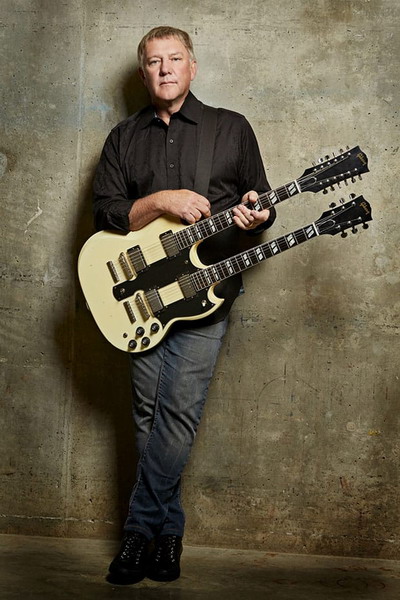 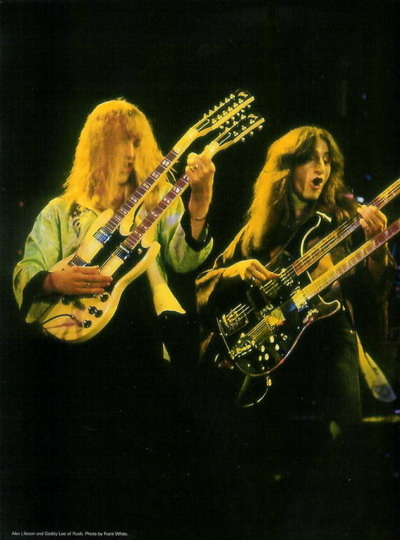 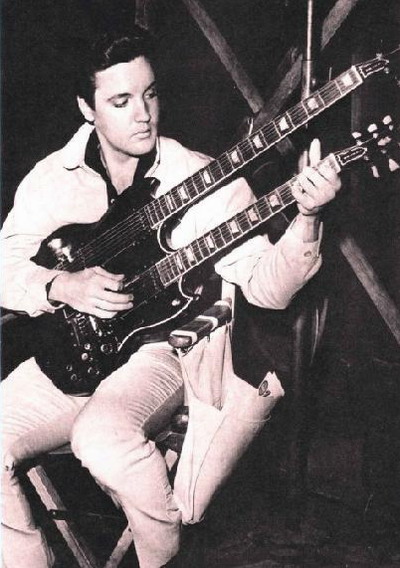 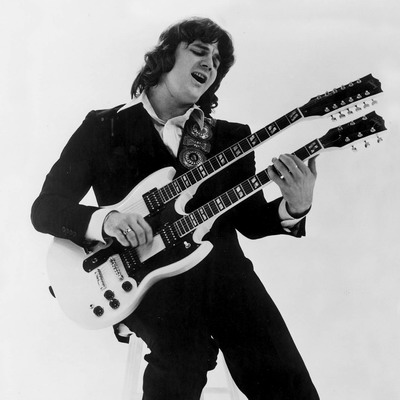 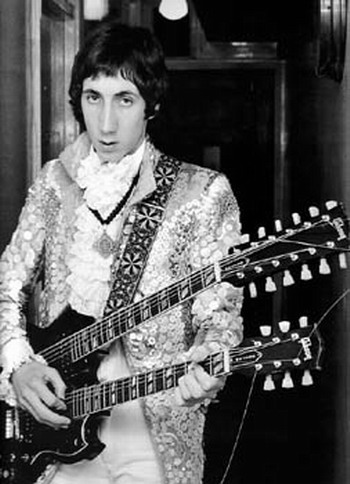 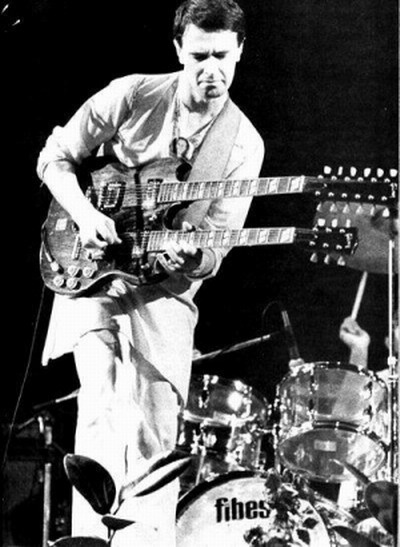