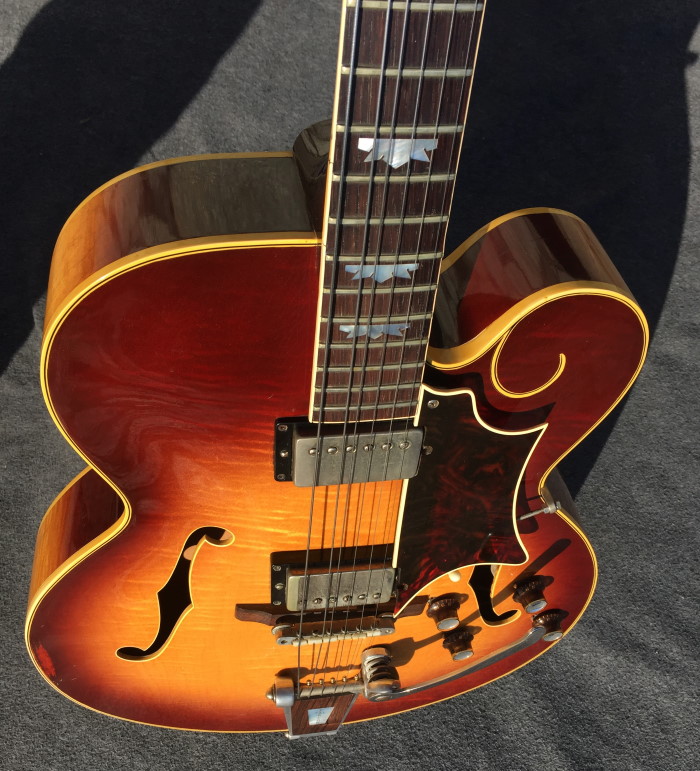 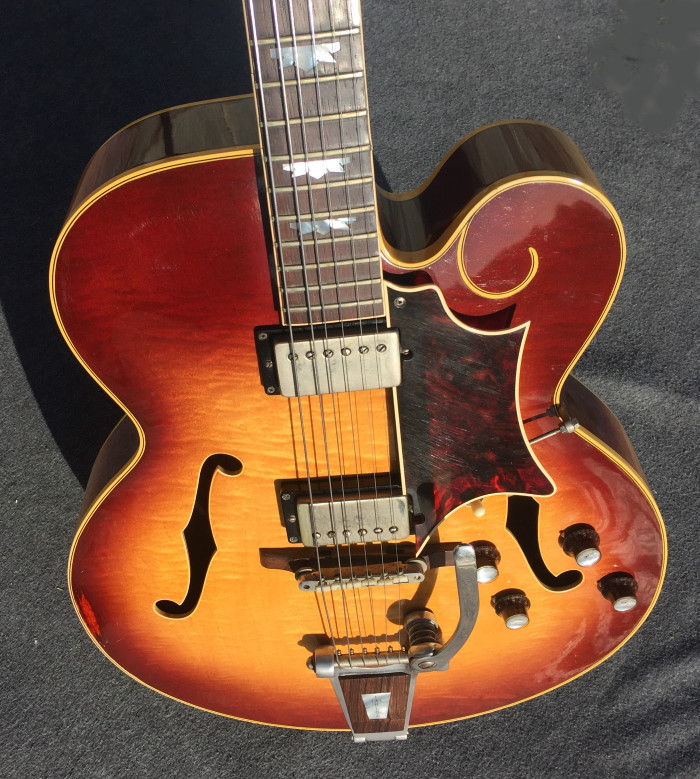 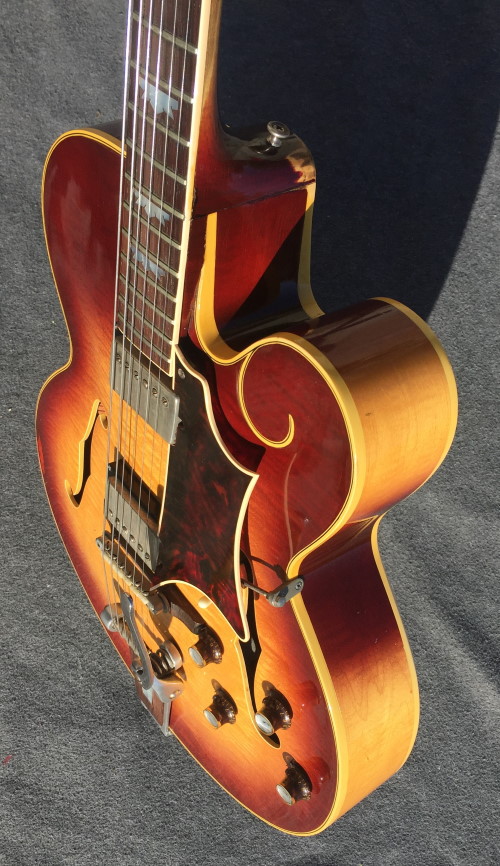 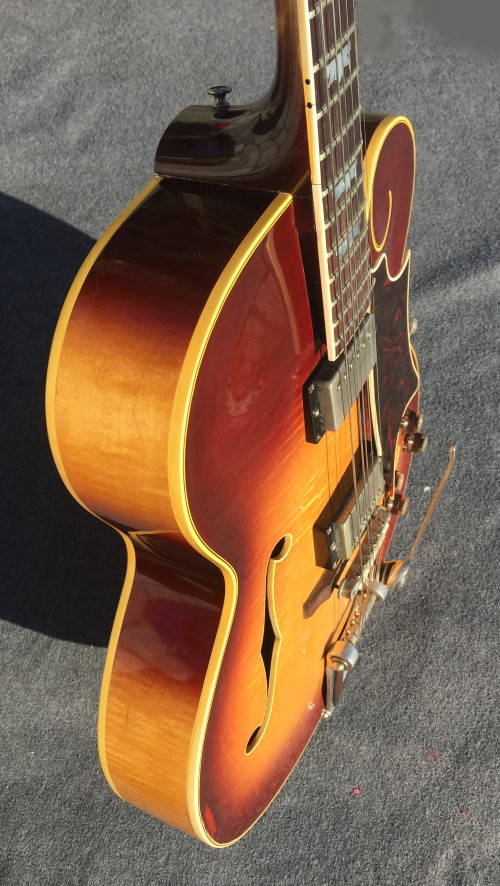 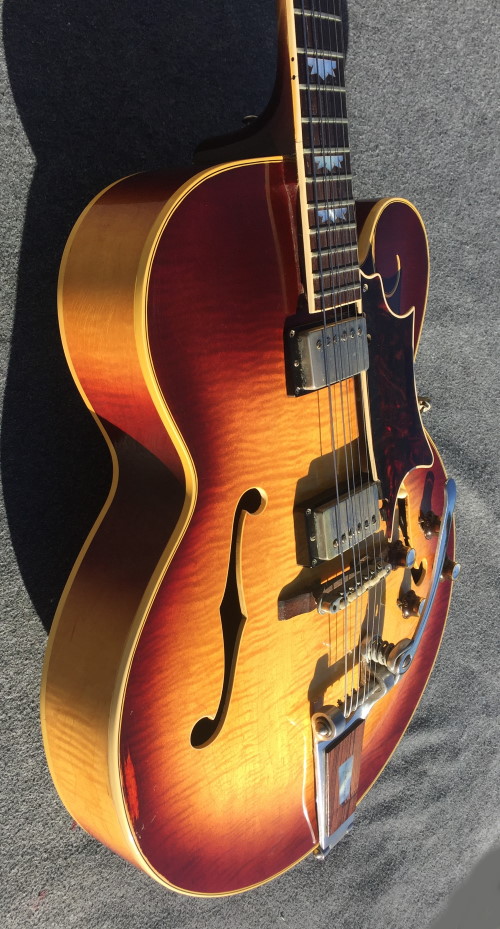 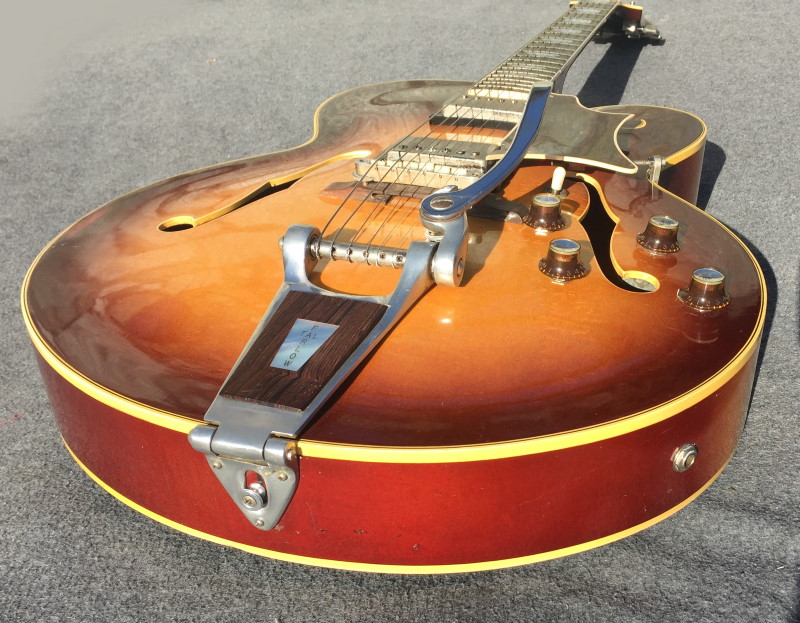 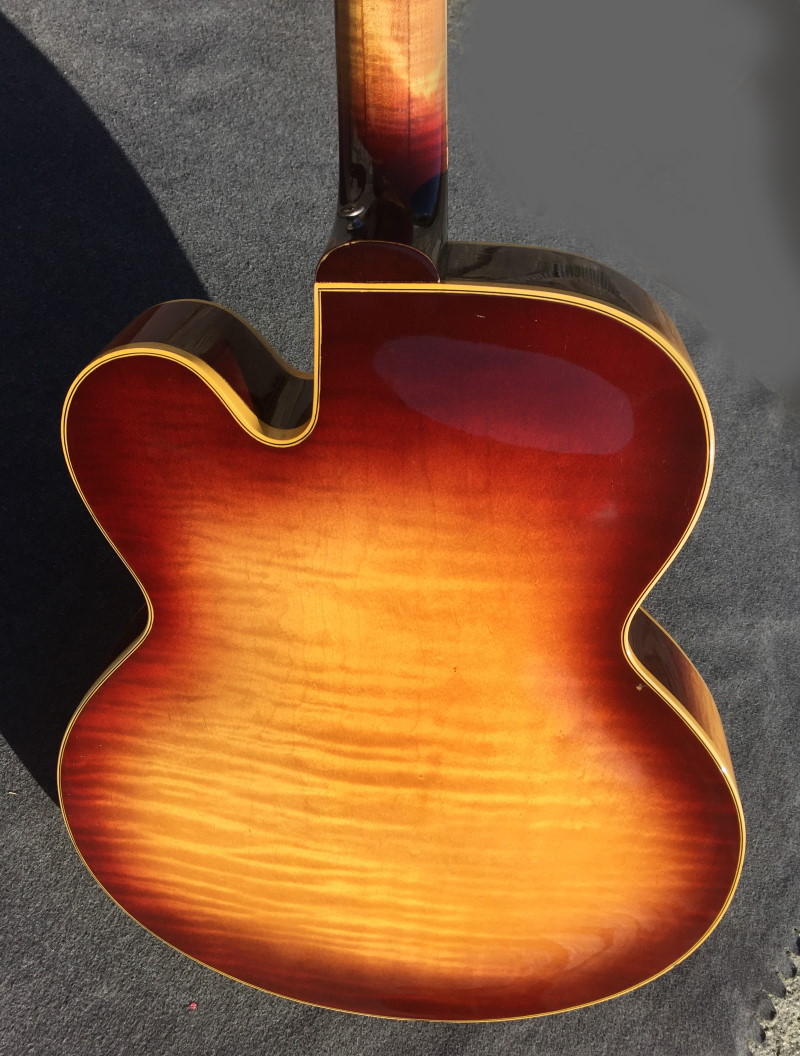 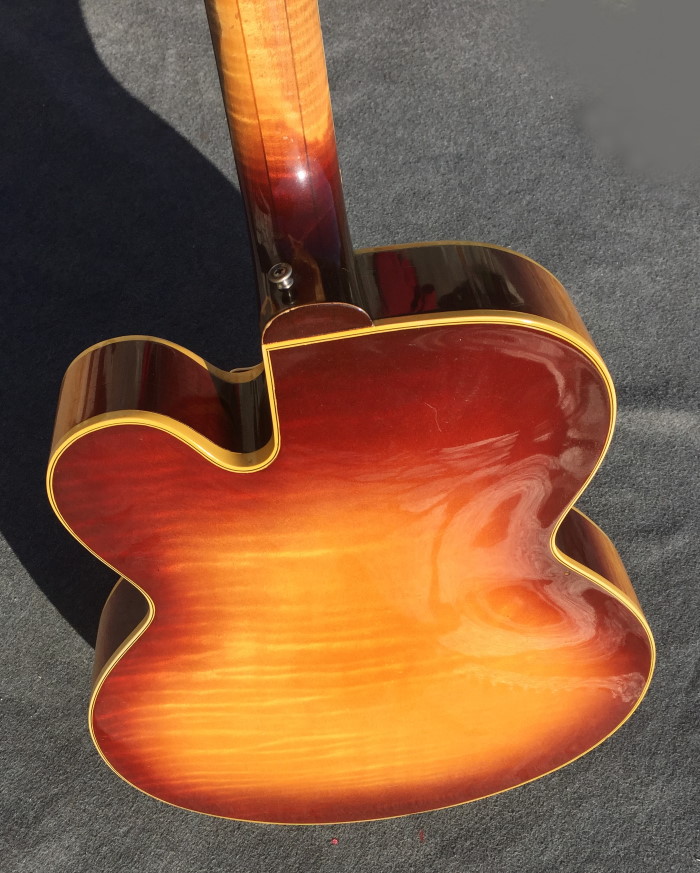 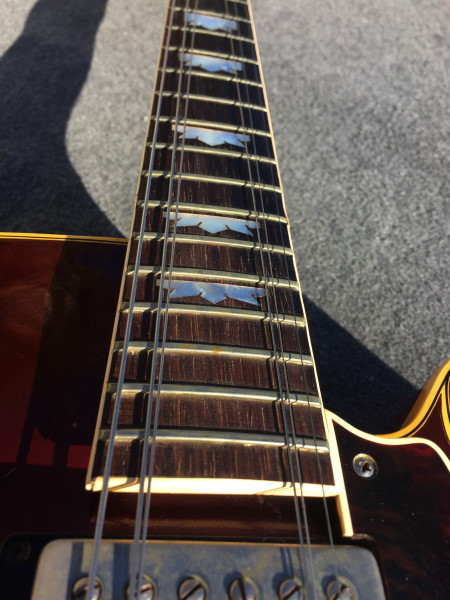 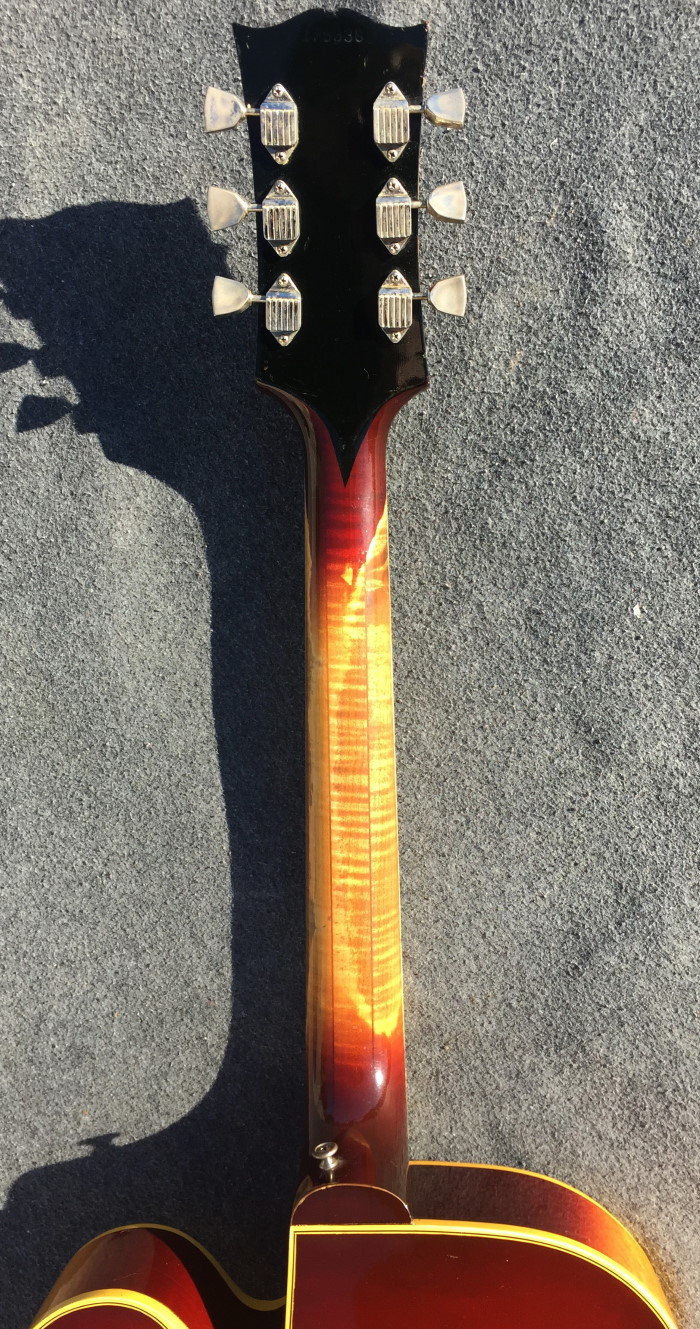 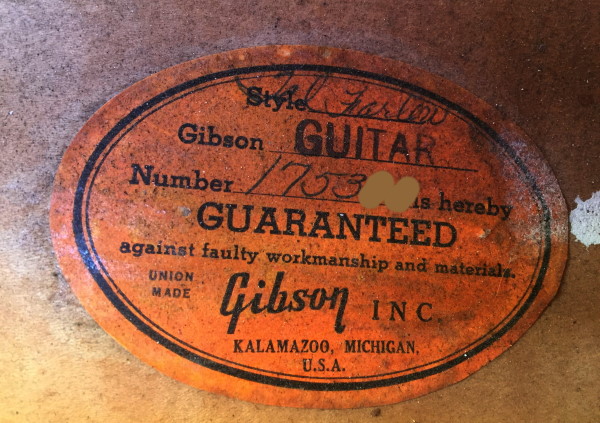 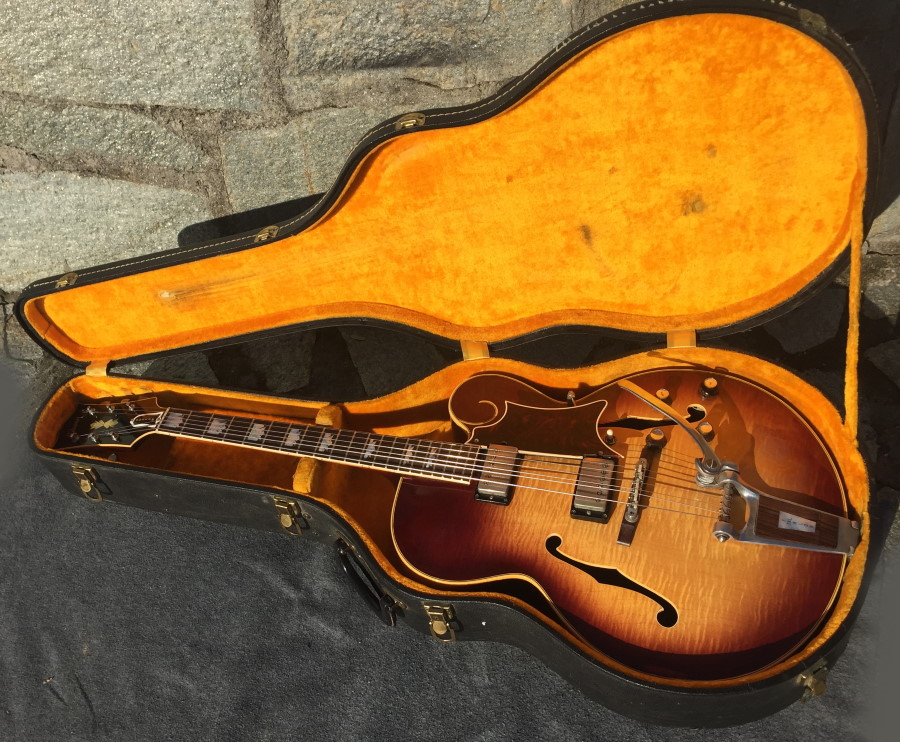 This is one rare Jazz Guitar that hardly ever come up for sale, its Viceroy Brown Sunburst finish is outstanding, it has 2 nickel plated Pat.# pickups, its 5-piece maple neck & its back & sides are gloriously striped with fiddleback Maple, its scroll cutaway is like no other guitar Gibson made. Has a 17″ bout and in Sunburst finish on laminated maple top reinforced with two parallel braces, laminated maple back and sides. Three-piece ‘flamed’ maple neck with two mahogany center strips, a very fast thin-to-medium profile and bound rosewood fretboard. Triple binding on top and bottom edges, single-bound f-holes and scroll inlay in cutaway horn. Unique Super-400 style long headstock with Inlaid pearl “Gibson” and pearl double crown inlay. “Custom” on truss-rod cover. Black-painted headstock rear face. Individual Grover Super Rotomatic tuners with ‘art deco’ stairstep-shaped metal buttons with adjustable tension. Orange oval label inside the bass f-hole with the style “Tal Farlow” and serial number written in black ink. It still retains its ABR-1 bridge w/nylon saddles & its chrome capped Brown knobs, its tortoise'gard is still perfect, its ribbed back nickel Kluson tuners, its upside down J-200 inlays & its tailpiece are all standard to this model, it is a sight to behold, rarely do you find such a magnificent example in exceptionally clean all original condition, it comes with its original Yellow interior hard case.

An extremely high-class model among the many Jazz signatures in the Gibson catalogue, the Tal Farlow was produced from 1962 to 1967 and only 215 were made in that five-year span, making them rare and desirable collector’s pieces. But this one is in a category all of its own: it is the prototype made two years before the first production model, and, above all, it was Tal’s personal guitar. Unlike most musicians who put their signature on a model but hardly ever use it, Farlow remained faithful to the same instrument throughout his career.
Gibson has always recognized the value of working with leading artists of the day, and Tal Farlow has been both a first-call sideman and a popular solo artist of the 1950s and ’60s. His performance credits read like a who’s who of the jazz world: he joined Margarie Hyams’ band in 1948, was a member of the Red Norvo Trio (originally with Charles Mingus) from 1949-’53, when he joined Artie Shaw’s Gramercy Five for a spell, before forming his own notable trio.

The Tal Farlow model, first released in 1962, has a body that is outwardly reminiscent of the popular ES-5 in its basic dimensions, but from there it departs in its own unique model form as dictated by this gifted guitarist. It’s trademark faux-scroll rounded cutaway (Farlow’s own design), upside-down J-200 fingerboard inlays, double-crown headstock inlays, and Tal Farlow trapeze tailpiece with inlaid rosewood block set it apart from any other archtop Gibson had ever created. This unusual signature model has always been a rare bird, and only 215 examples were produced between 1962-’69. 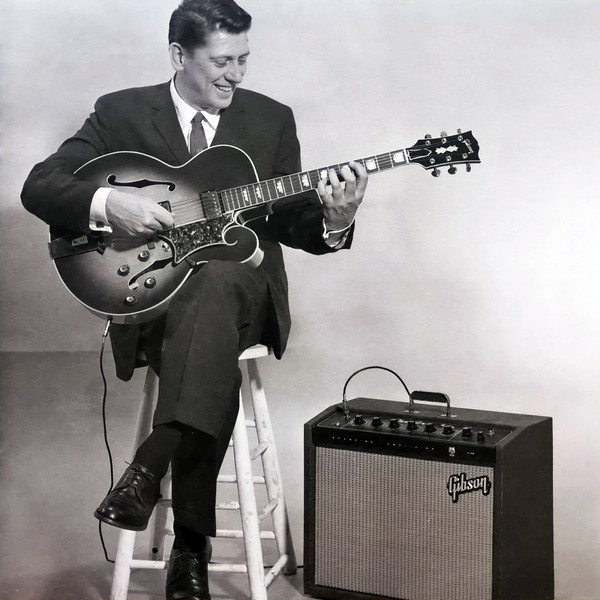 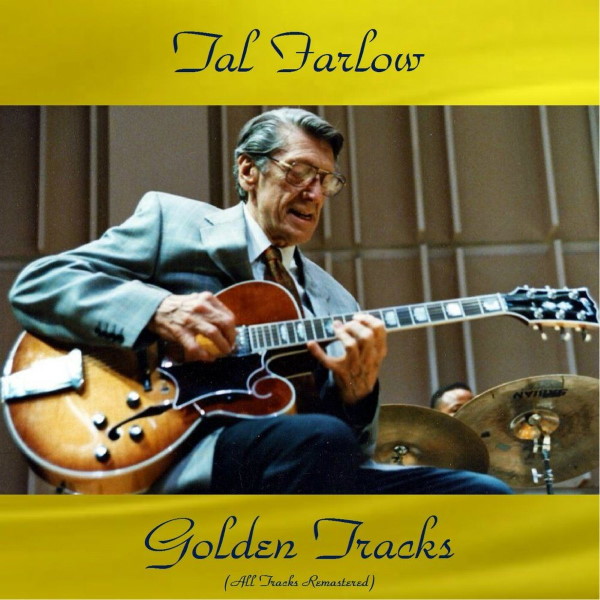