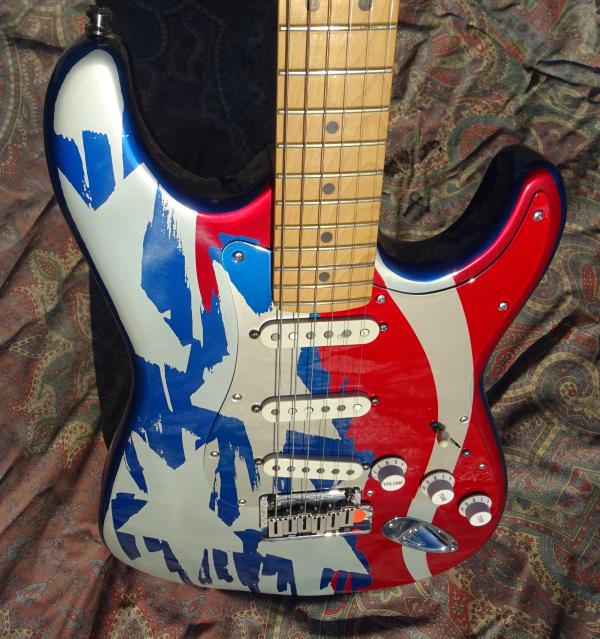 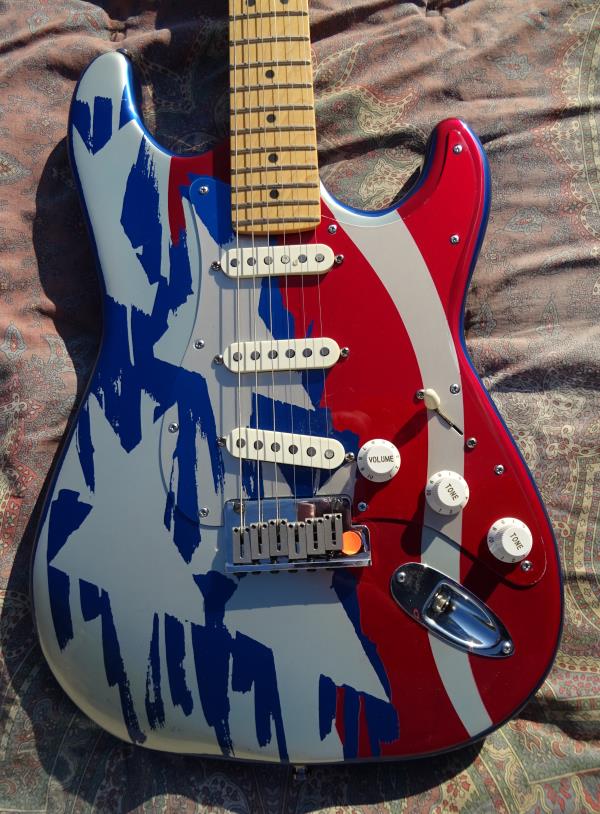 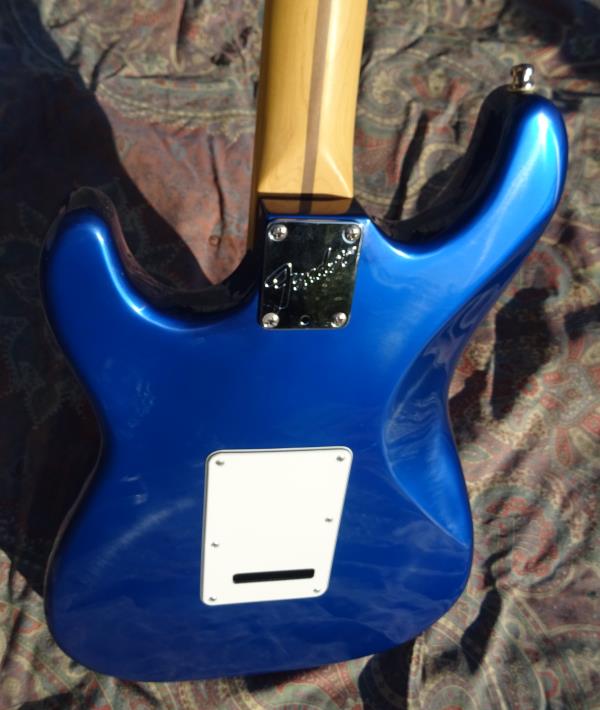 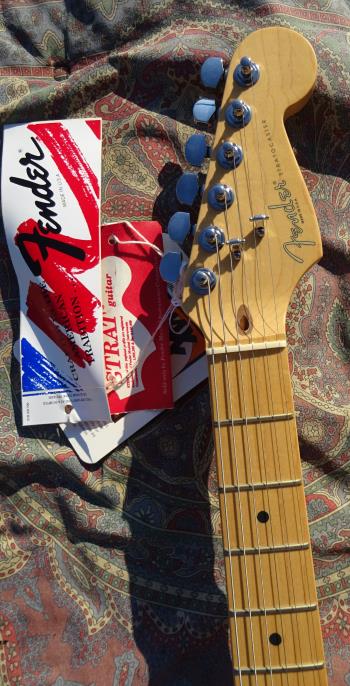 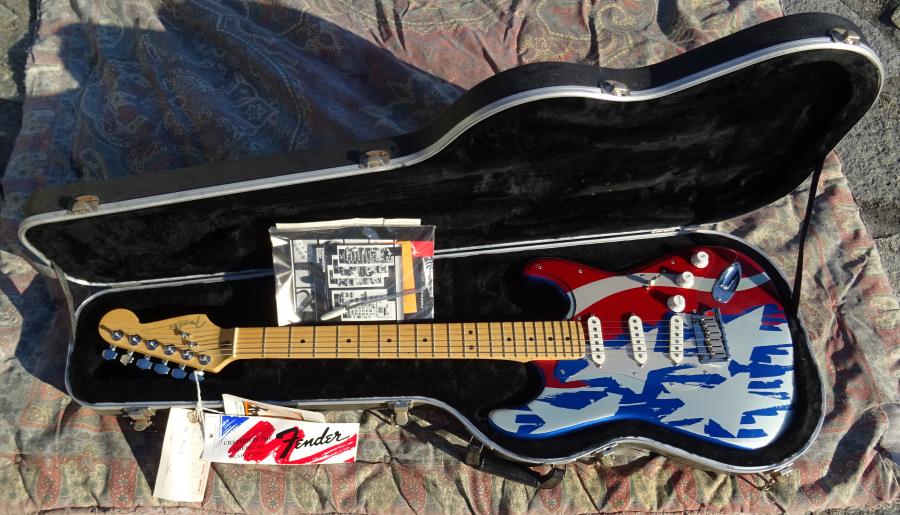 In 1993, Fender purchased some aluminum bodies and had some engraved for the 1993 NAMM show. In 1994, Fender made approximately 400 American Standard Stratocasters and 100 American Standard Telecasters anodized in three colors. There was a blue tie-dye, a purple tie-dye and an American flag  pattern for Fender's 40th Anniversary. Unfortunately, Fender didn't keep records of how many were made in each color.

Part of the guitar collector’s creed (an unwritten, unofficial entity, to be sure) includes axioms such as “Beauty is in the eye of the beholder,” or “The right to pursue whatever makes you happy...” Basically, there are no rules, and the hobby lends itself to an amazing array of personal tendencies within one very defined element. Some chase ’Bursts, others pre-war Martins, D’Angelico’s, etc.

For some, happiness is an aluminum-bodied Fender. Fender made the aluminum-bodied Harley Davidson Stratocaster in 1993 and later its metal brother, the Freddy Tavares Aloha Stratocaster. Both instruments featured engraved, chrome-plated aluminum bodies.

But in 1994, Fender’s Arizona factory produced a small number of aluminum American Standard Stratocasters and a much smaller number of aluminum American Standard Telecasters in three unique anodized finishes – purple marble, blue marble and red, silver and blue flag – which gave the guitars an indescribably unique appearance to match the singular sound produced by their hollow bodies. They are unlike anything Fender produced before or since.

In addition to the aluminum American Standards, Fender made three other unusual aluminum-bodied Stratocasters in its California custom shop. The first has a shiny, chromed body, like the Harley, with a black Custom Shop pickguard and black headstock. A near mirror image is the jet black aluminum Strat, with its black body, chrome pickguard and black headstock. Only six were made. The third is green, with chaotic black lines and gold catsup bottle swirls.

Joe Schneider, a collector in Hollywood, Florida, is the only person known to have compiled the complete nine-guitar set, in a labor of love that spanned several years and included a detailed nationwide search.

Schneider’s first aluminum was the purple Strat, which he bought from ABE Music, in Miami.

“The owner had it put aside for two years, intending to keep it for himself,” he said.

The dealer told Schneider that in addition to being made in limited numbers, many of the aluminums had small flaws (dents caused by the molded interior of their cases), and when many dealers returned them to Fender, the guitars were deemed irreparable and thus were replaced under warranty.

Schneider was later told (by non-Fender sources) that Fender was no longer purchasing aluminum bodies from the manufacturer. And in fact, dealers were selling unfinished aluminum bodies at guitar shows.

After his conversation with Wilex, Schneider set about tracking down one aluminum American Standard in each finish.

“I started by calling local music stores. One Fort Lauderdale store had a flag [finish] Stratocaster that was on layaway for a year,” he said. “It had added some features I didn’t see on the others – a 40th anniversary Stratocaster pin on the headstock and an engraved 40th anniversary neck plate.”

Schneider then started calling music stores around the country. Many of the dealers he spoke to didn’t even know Fender made aluminum guitars, and several who received aluminums sent them back to Fender because of defects. Still others had recently sold their entire stock.

Scouring the country, Schneider eventually found all the aluminums, except the purple Telecaster. Through a major sleuthing effort, he learned about a former Virginia music store employee who had one.

“When I finally tracked him down,” Schneider said. ”He told me ‘I know what I got and I ain’t selling.’”

Finally, Schneider placed a want ad in VG, and he quickly received a message on his answering machine from someone in Rochester, New York, who had a purple Tele.

“I thought my friends were playing a trick on me,” he said. “But sure enough, when I called, the voice on the recorder was real, and the set was completed.”

When Ron Bicknell, manager of the Hallandale (Florida) Guitar Center, heard about the collection, he asked Schneider to put it on display. Guitar Center circulated a press release nationwide, and the collection was exhibited at the store from February 1 through April 30 of this year. It generated worldwide attention, and people from around the country, as well as collectors in England, Japan, Germany and Singapore, contacted Schneider about the aluminums.

“One caller told me he drove through 16 states in search of an aluminum Telecaster,” Schneider said. “And he didn’t find one.”

Many callers sought advice, others talked about their one-of-a-kind aluminum Stratocasters, ordered from the Fender Custom Shop.

Schneider is often asked how the aluminums sound.

“Through an amplifier, they sound just as good as any other American Standard Stratocaster or Telecaster. Without an amp, they have a nice, resonant, acoustic quality. The playability is also similar to their wooden counterparts, except aluminums are comfortably lighter.

“The necks on the Custom Shop Strats are highly-figured maple,“ he added. “The jet black and chrome Strats have ebony fingerboards and play well with a slide. The aluminum American Standards have maple necks, with and without rosewood fingerboards.”

The Fender aluminums are a rare anomaly that likely will never be reproduced, but they will certainly continue to pique the interest of guitar enthusiasts well into the future.

The Stars and Stripes (a.k.a Flag) Tele and Strat.