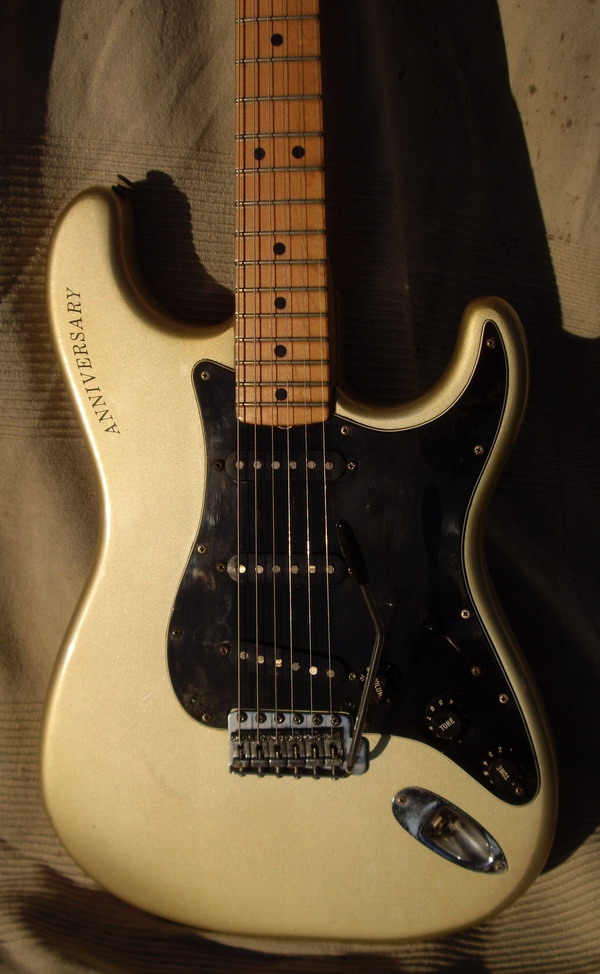 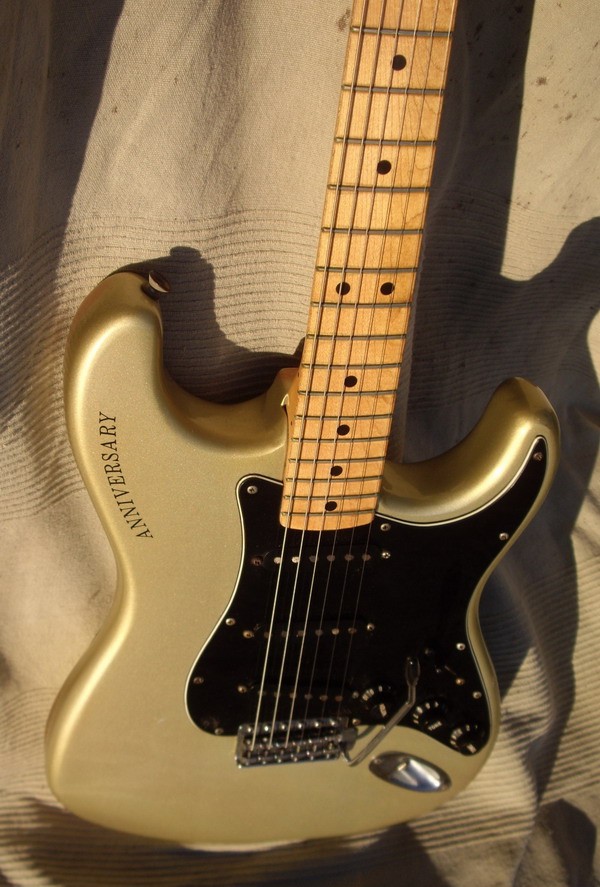 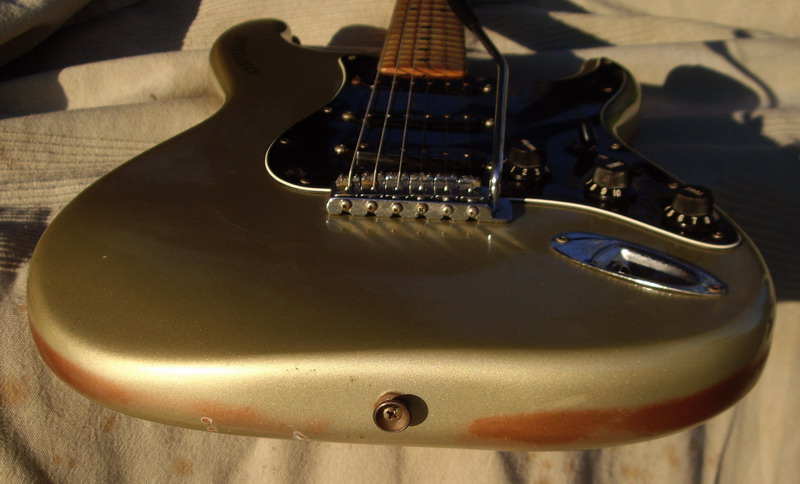 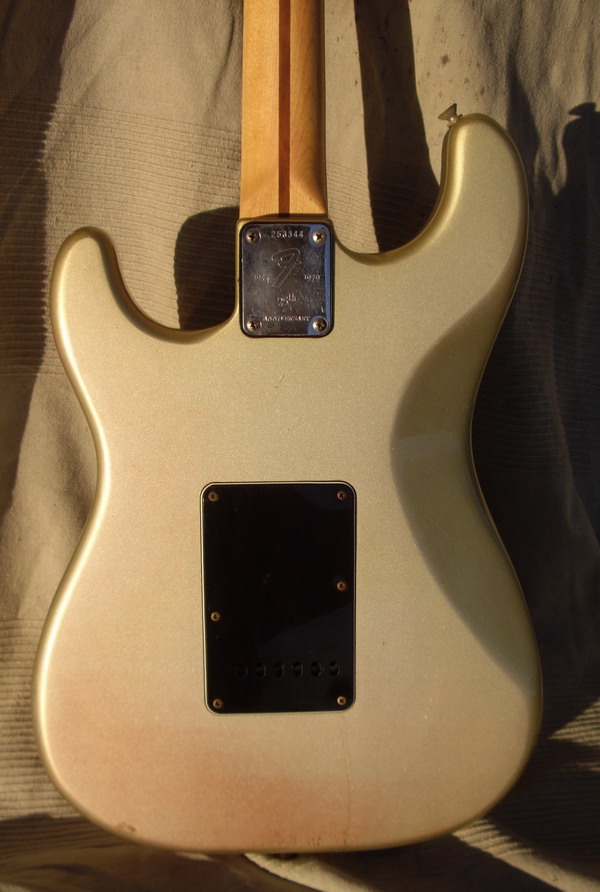 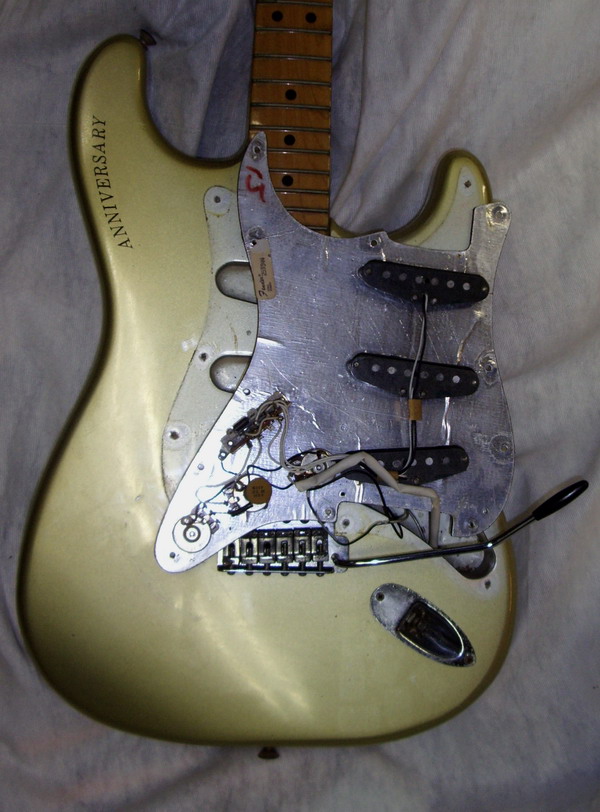 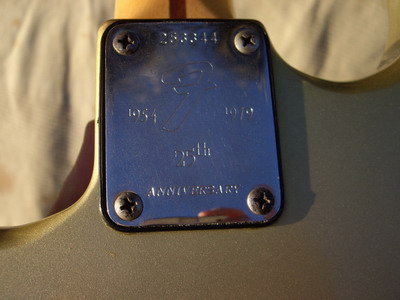 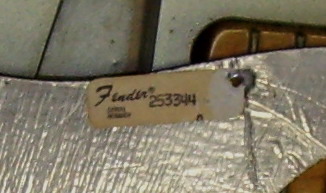 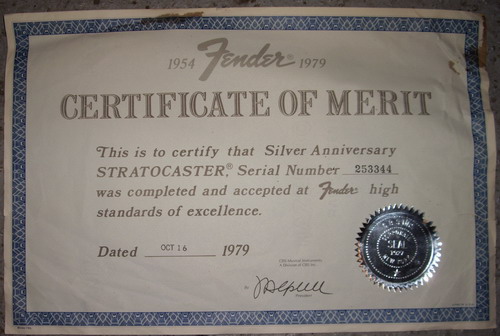 As Fender Stratocaster fans around the world anxiously await the unveiling of 2004's 50th Anniversary Stratocaster, what better time to take a look back at the instrument that marked the 25th Silver Anniversary of the Fender Stratocaster.In 1979, Fender celebrated the 25th anniversary of the Stratocaster (introduced in 1954) with the first "anniversary" instrument, and the first Fender instrument to be issued in a pre-determined and numbered, limited quantity.The first 500 or so instruments produced were finished in Pearl White. However, due to the instability of the finish and the checking that resulted, many were recalled and re-finished in Porsche Silver (though Fender refers to it as "25th Anniversary Stratocaster Silver"), the color that was used in the rest of the production run.The 1979 Anniversary Stratocaster is significant for a number of reasons. It represents both a look behind and a look ahead for Fender. Features of note include: reversion to the four bolt neck plate; abandonment of the "bullet" truss rod adjustment in favor of the truss rod adjustment at the body end of the neck; and, the first use of "locking tuners" in a Fender guitar (Sperzel).

Our 25th Anniversary Stratocaster. A limited edition. The Anniversary Stratocaster was designed by players for players. It's not simply an imitation of the early Strat, but a combination of all that made the Stratocaster revolutionary plus a technology that's evolutionary. The quantity, naturally, is limited. Which is why we include a certificate authenticating the serial number with every guitar.It's loaded. What you see is a new anniversary-silver painted body with a maple neck. The commemorative designation appears on the front. A four bolt chrome neck plate marks the dates "1954-1979."What you hear are those three famous wide-ranging pickups, synchronized tremolo that comes back to pitch every time, precise intonation thanks to individual bridge adjustments and the Stratocaster's legendary fast, easy action.New Sperzel keys. The Anniversary Stratocaster also features new Sperzel keys, a significant tuning key innovation. Tolerances are superior, and patented string post locking totally prevents backlash.To top off the package, we also introduce the new Fender black molded flight case lined with super plush. It'll help keep your instrument a legend for the next twenty-five years.

They went fast in '54. They'll go fast now. Go see and play the unique Anniversary Stratocaster at your authorized Fender dealer today. In a world of imitations, it's nice to get your hands on an original.

The 25th Anniversary Stratocaster from Fender®

The neck plate of #000000. Although the prototype has an atypical number format, the design would remain the same on all subsequent production models. 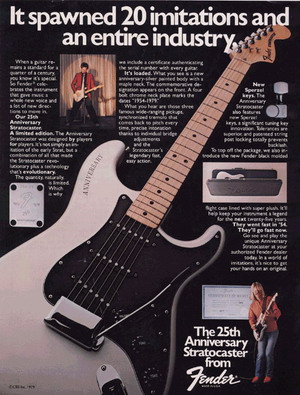 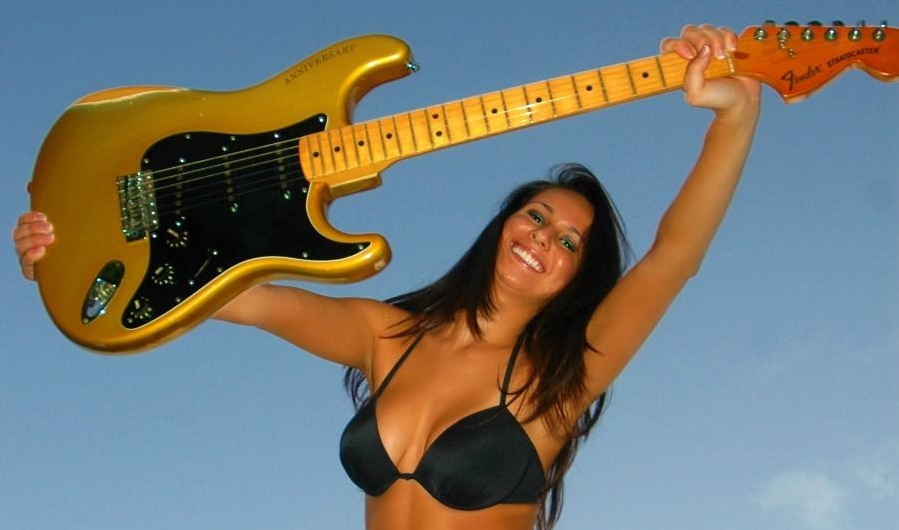 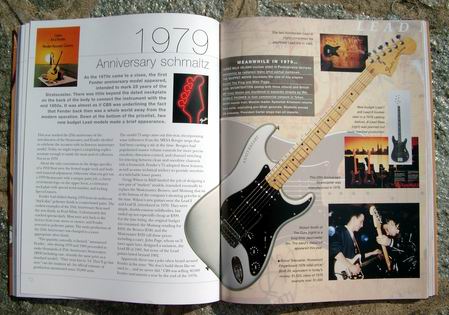