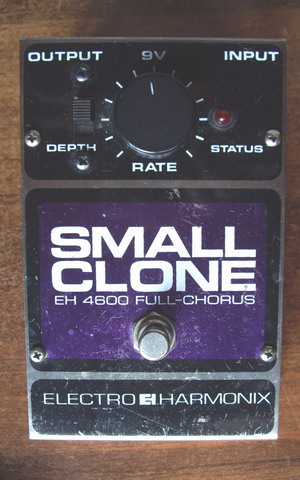 This pedal has become VERY popular due to it's use by Kurt Cobain in Nirvana and many others. From some Nirvana web sites:

Kurt used the small clone for the chorus effects on Nevermind and Aneurysm. Visible easily on the Nevermind tour. His chain then simply went Guitar - DS2 - Small Clone - Amp. Used on Unplugged too. Visible in In Utero booklet under "Dumb" and on cover of Wishkah. Towards the end, Kurt got increasingly "effects-happy". He began using the Small clone for solos like School, About a Girl, In Bloom, Serve the Servants, etc.

The SMALL CLONE sounded great for the same reason that old fuzz faces, Tweed amps, and Les Paul Juniors sound so good - Simplicity!. The circuit used was about the simplest chorus that could be built based on the delay chips available at the time. There are no extra devices or circuitry to affect your pure tone.  The 3007 chip was used in the original pedals in the late 1970s and very early 1980s and allows higher levels and less noise without clipping your signal.