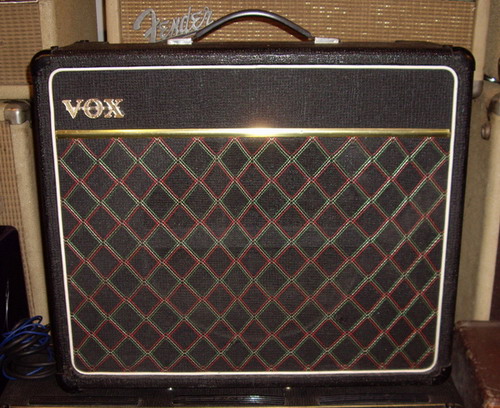 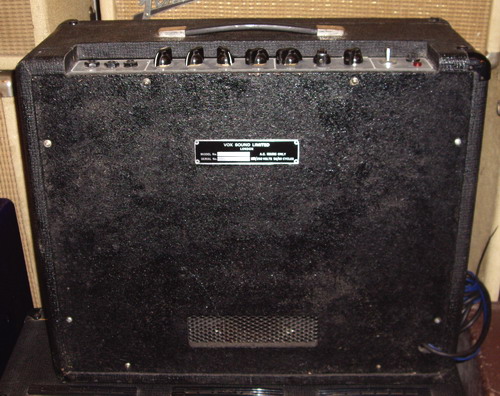 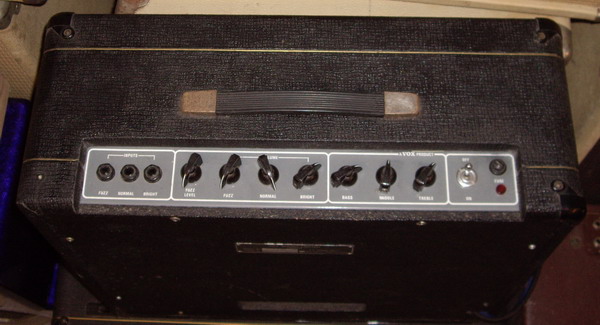 1975 - The Vox Escort 30 appears a 30 watt transistor amplifier cosmetically styled like an AC30. By now a Solid State version of the AC30 was available, the AC30SS and although it did not sound like a real valve AC30 at the time it was good valve for money.

The Escort 30 Lead amp was developed by the Dallas Arbiter (CBS) ownership of Vox. It was introduced to the Vox line in 1975.
It featured a 30 watt solid state amplifier and a 12" Vox heavy duty speaker made by Fane. The amp had three inputs: Fuzz, Normal and Brilliant. Each input had a separate volume control.
A Bass, Middle and Treble control was common to all three channels. A Fuzz Level control was also included.
The amp also included a remote foot switch for the fuzz tone.
The back panel of the Escort 30 Lead was made of 1/8" thick masonite, painted black. The model name and voltage requirements were silk screened on the back panel.
The components that make up the power supply for the Escort 30 Lead (mains transformer, diode bridge, and filter capacitor) were screwed directly to the wood on the inside left side of the amplifier. This sort of construction would be unlikely to pass US electrical safety codes.
The Escort Lead was discontinued in 1983.