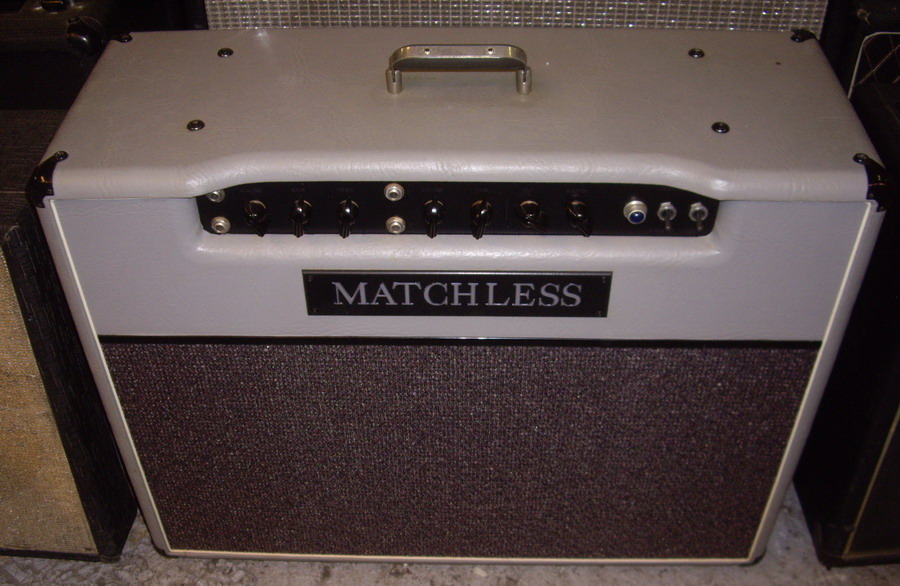 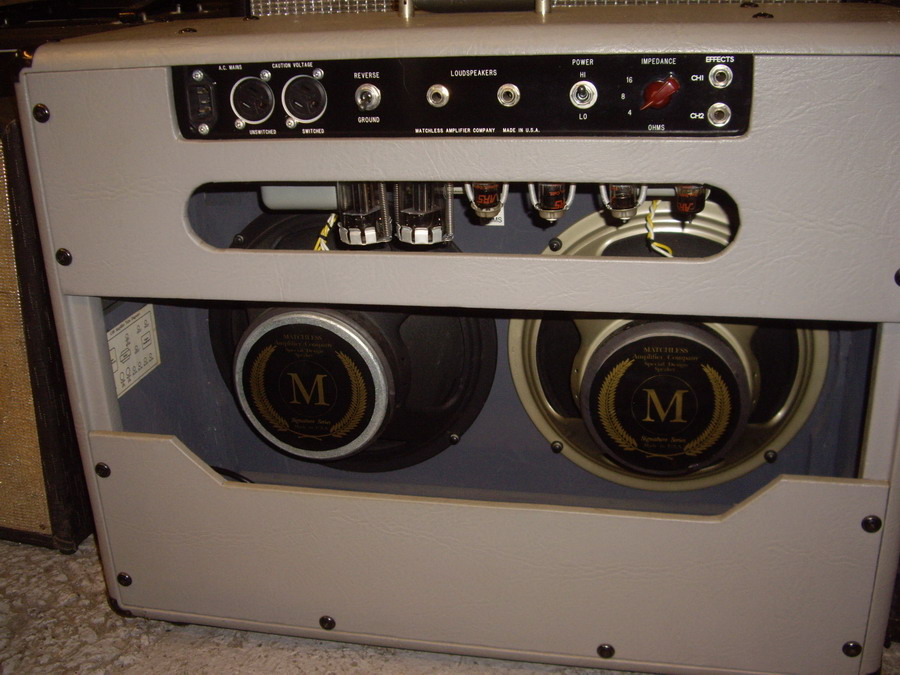 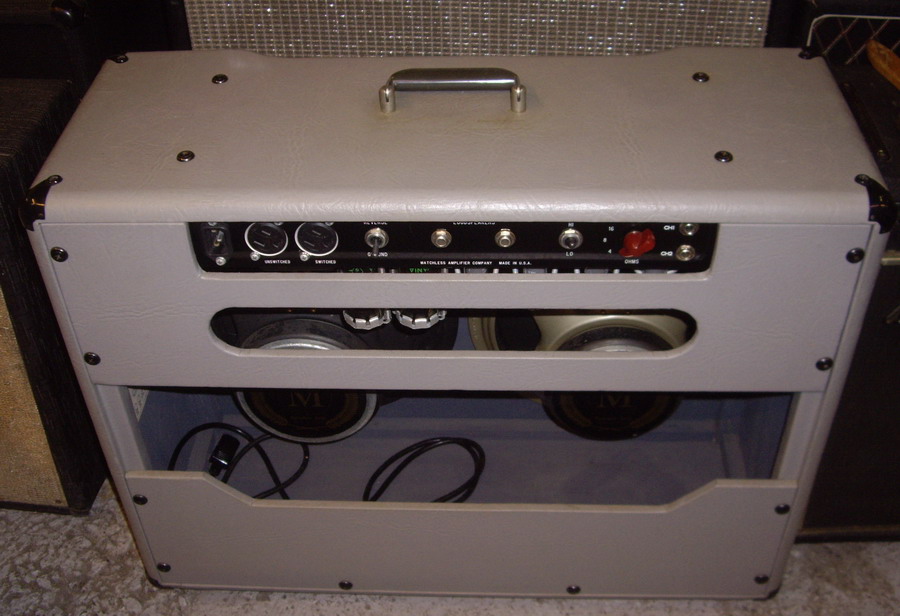 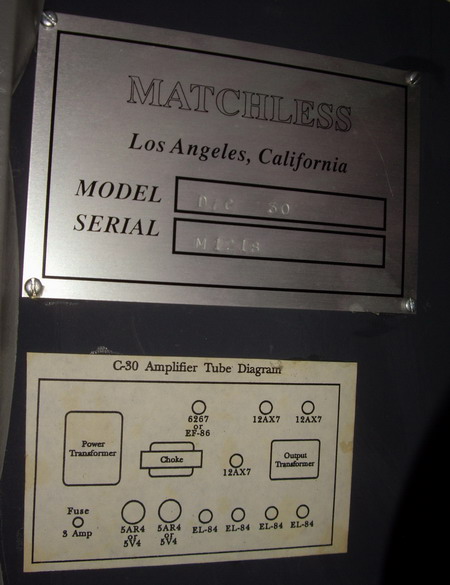 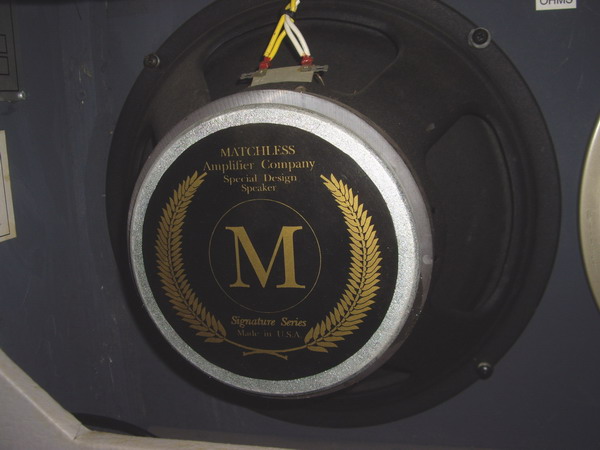 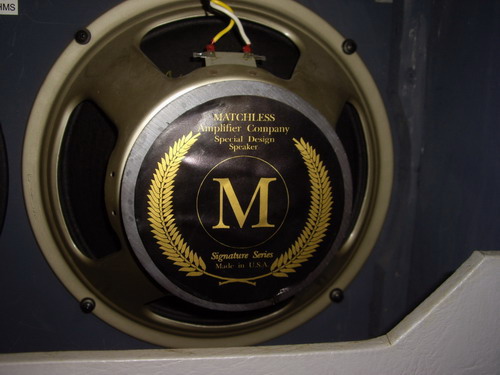 Very First Editions 90's MATCHLESS DC-30 Mark Sampson era Pre Factory Gray Tolex. Come from my collection in near mint conditions! as new never used! With Original Cover Now ready to play at 117 Volts but the internal wiring of the transformer allows the two options 117 or 220. The controls for the DC 30 are simple. Two channels - 2 x 12AX7 with bass and treble controls, and an EF86 channel with a 6 position tone "preset" control and a variable HF cut.  Both of these channels run through a bypassable push/pull master volume. It's fun if you accidentally bump that volume control off while you are playing.

Preamp Tubes: One EF86, three 12AX7s (one for PI) Output Tubes: Four EL84s in class A, cathode-bias. Rectifier: GZ34 Controls: Channel 1 – Volume, Bass, Treble: Channel 2 – Volume, Tone: Shared – Cut, Master Speakers: one Celestion G12M Greenback, one Celestion G12H-30 (modified) Output: 30 watts RMS The controls for the DC 30 are simple. Two channels - 2 x 12AX7 with bass and treble controls, and an EF86 channel with a 6 position tone "preset" control and a variable HF cut. Both of these channels run through a bypassable push/pull master volume. It's fun if you accidentally bump that volume control off while you are playing. The 2-12 configuration features a "Matchless modified" pair of dissimilar Celestions: G12H30 and a Greenback 25. You can close mic one or both, or back off a bit and capture both for versatile variation in tone. In a mix it adds for nice broad sound when each is hard panned. A somewhat quirky thing, but understandable given the discrete topology, is the EFX loop for each channel. I haven't quite figured out how one might use the same EFX for both channels without some fancy switching, unless you were jumpering the channels.

THE HISTORY: If there ever was a modern legend in the guitar amp world then this is it. Despite its very Vox-like heritage, this amp covers so much sonic territory that you may never need to look elsewhere. Not that you could afford to either after purchasing one! To this day I have never been so impressed upon by a guitar amplifier, both sonically and aesthetically. Rumor has it that Mark Sampson consulted with well known mixer Jack Joseph Puig during the design of this amp…and if true, the collaboration paid off. My introduction to the DC30 was at a Toad The Wet Sprocket concert in 1995 where the guitarist Todd Nichols was playing one in green tolex. The illuminated Matchless logo caught my eye and the sounds that poured out of his amp were literally jaw dropping! It exuded a complex chime with a muscular clarity to the midrange that just sounded out-of-this-world to me. When I made it home I went on a mission to find out where I could buy one of these amazing amps. Despite the shocking price tag for a 20 year old kid, I managed to scrounge up enough cash from my day job to buy one… then another… and then another. Au revoir Peavey Classic 30! The DC30 is the company's flagship amplifier and boasts 30 watts via four el84 power tubes, switchable to half power via a toggle on the rear of the chassis. The rectifier is interchangeable between one 5AR4 or two 5V4G's, the latter producing a more spongy and slightly smoother overdriven tone. A 12ax7 is used in the phase inverter position. The preamp tubes used in channel one are 12ax7's. You can get glassy clean fender-like tones with the volume set low, but this channel also overdrives into a very smooth vintage grind. With the volume up past 2 o'clock, you can roll the bass control back a bit and maintain a very tight and focused chug. Channel two is all about glorious midrange. It is the hotter of the two channels and features only one 6 position tone control that thickens with every satisfying click. One ef86 preamp tube is used for this channel and it is recommended to buy a high quality version because of a tendency for the tube design to become microphonic. The definition that is maintained from string to string even in the highest gain settings is truly impressive. After the channel controls are a "cut" knob which attenuates high end frequencies and a master volume which engages via a push/pull pot. There is a confluence of refined quality and mojo to this amps sound that will please any tone purist. There is nothing like standing next to this amp with it wide open! It sounds like clean, pure, raw power.