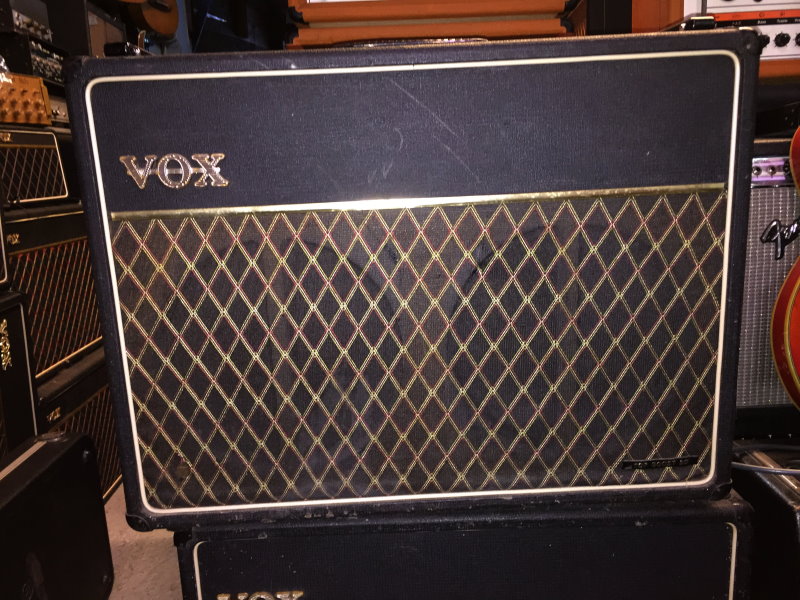 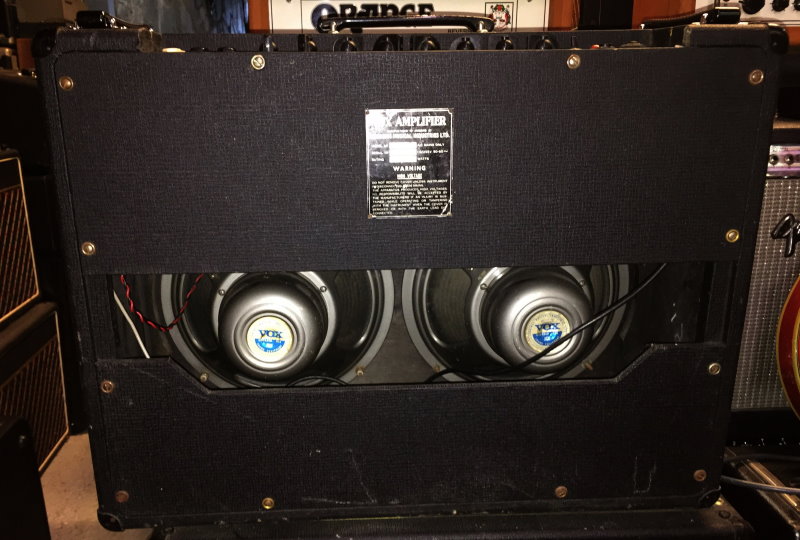 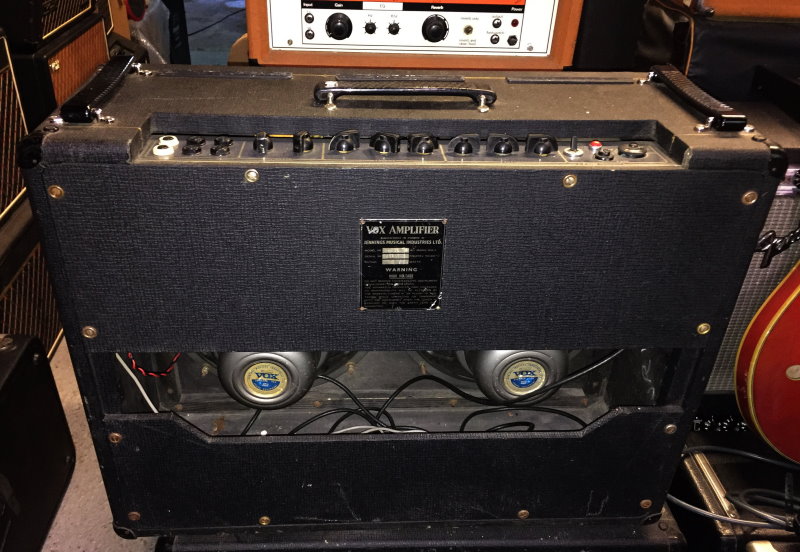 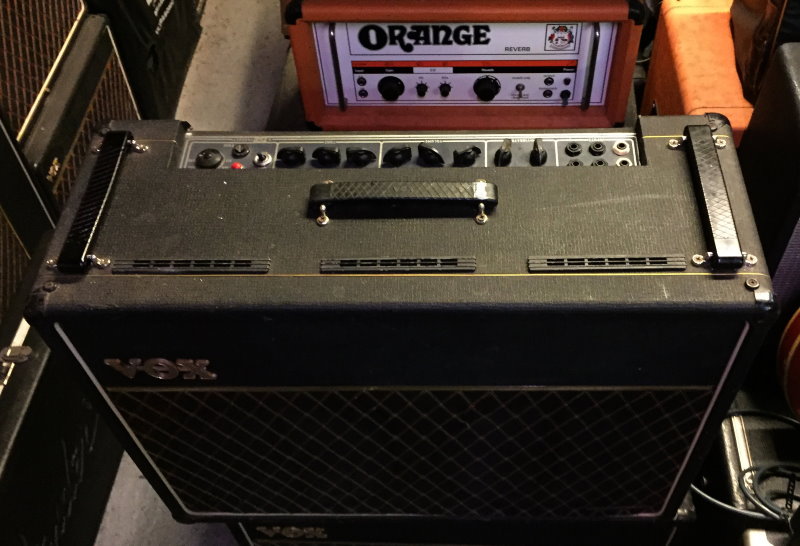 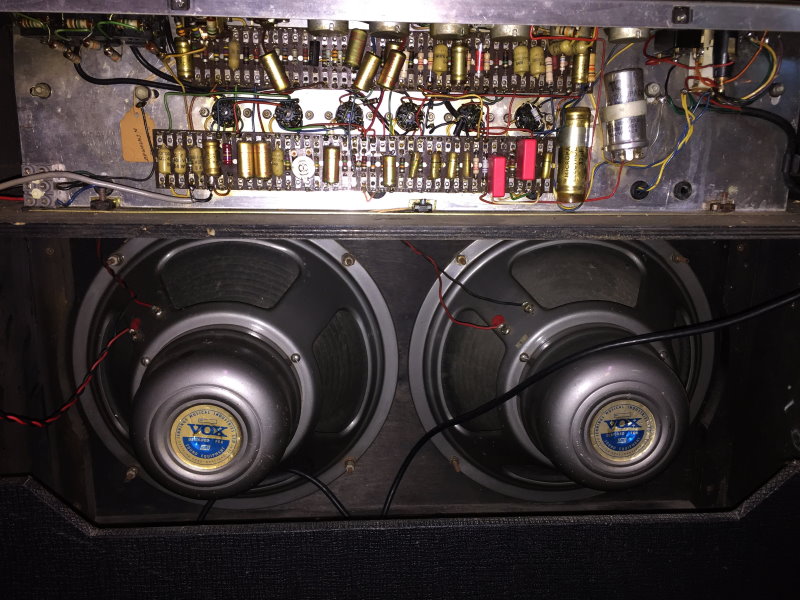 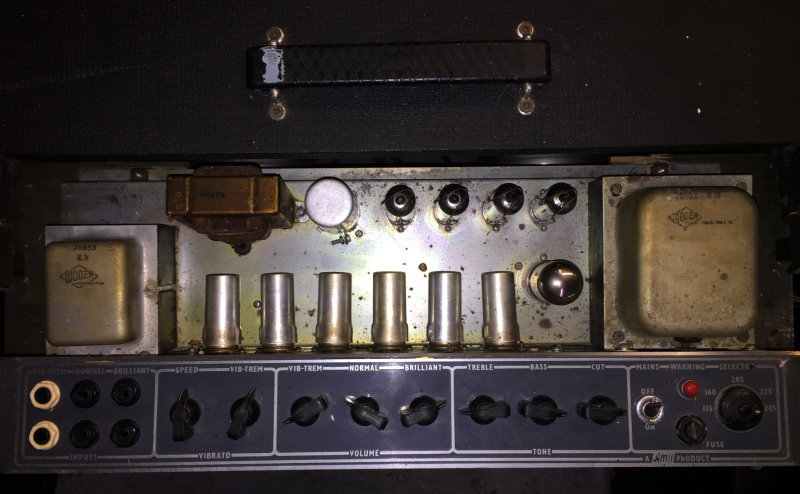 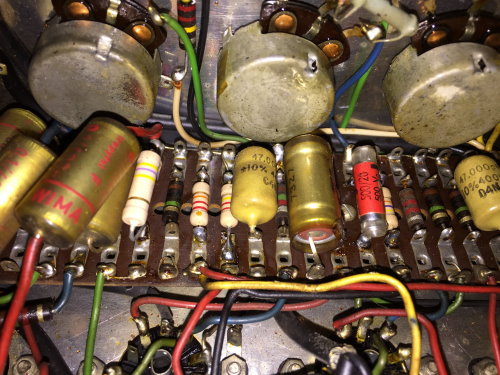 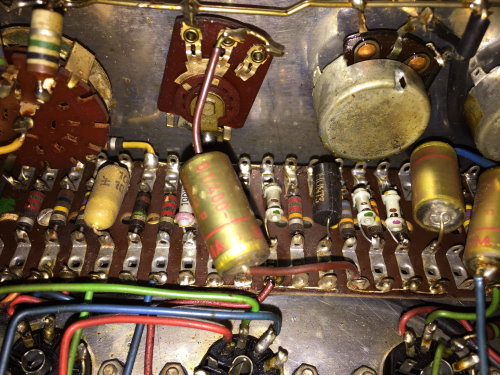 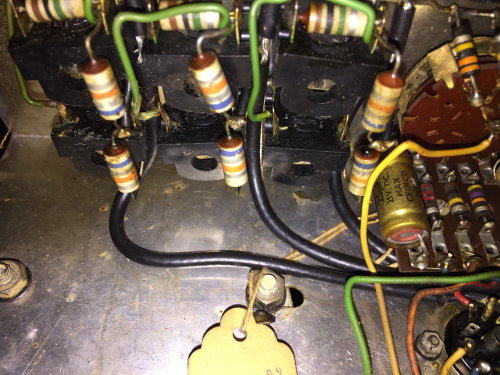 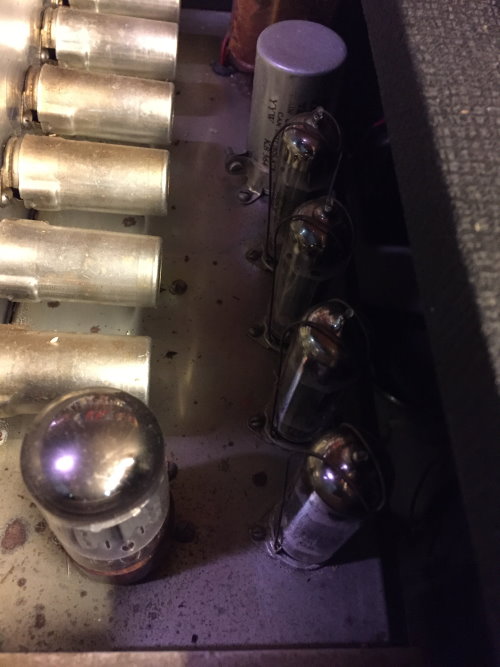 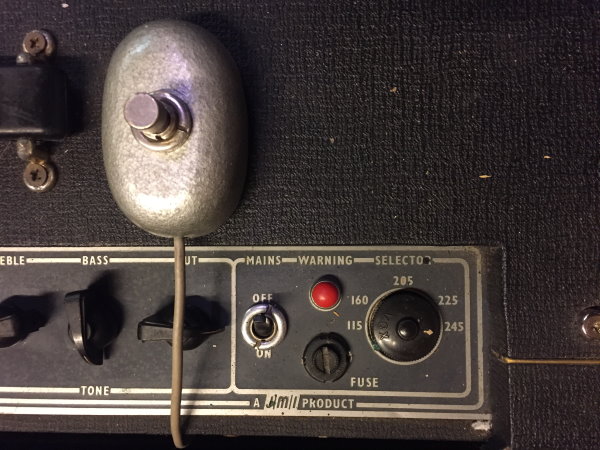 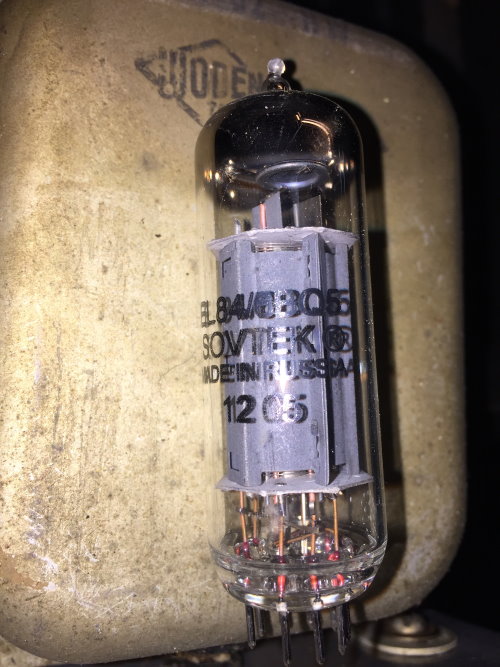 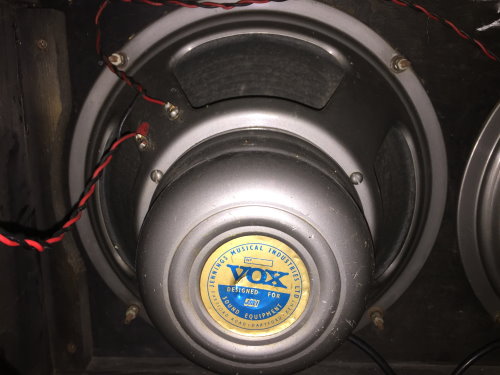 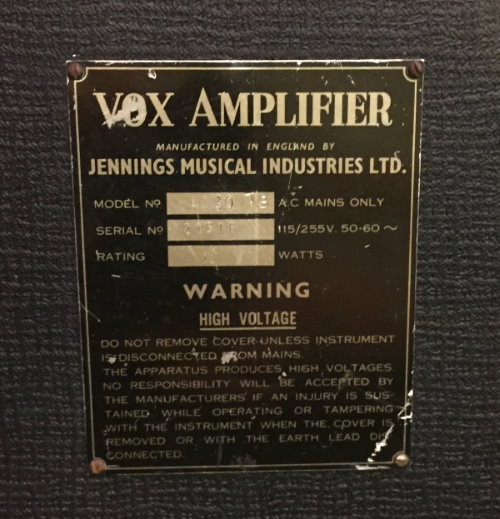 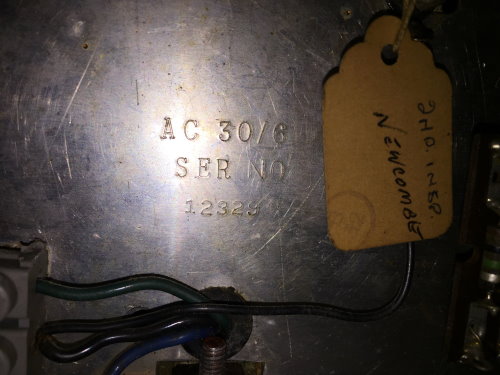 The AC30
Originally conceptualized as a “twin” AC15, the AC30 retained several important circuit elements of its little brother: an EF86 in the front end, EL84 power tubes running in cathode bias (this time, four of them), and no negative feedback in the output stage. The use of negative feedback in amplifier design was a technique developed specifically to suppress harmonics generated by the power stage, and the sound of a Vox amp depended on not suppressing those harmonics. With Denney and Underdown in charge of the internal aspects of the new amp (which included a larger 30-watt output transformer, and an upgraded power transformer, along with a GZ34 rectifier tube), and Jennings taking care of the cosmetics, the new AC30/4 (which denoted its four inputs—two for the Normal channel, and two for the Vib-Trem channel) rolled out in 1960. The first AC30s had a single Goodmans Audiom 60 12" speaker or a Celestion G-12, but neither configuration delivered the desired results for guitar, and the amp was refitted with two Celestion G-12s and later, Celestion T.530 speakers. The first AC30s delivered to the Shadows would likely have been equipped with either of these speakers.
With England’s “beat boom” in full swing, and the Shadows leading the charge with their 1960 hit, “Apache” (which was probably recorded with an AC15), the AC30 soon became the most sought-after guitar amp in Britain. The AC30 established JMI as the preeminent musical equipment manufacturer in the U.K., and it gave Tom Jennings the runway he needed to launch a vast array of new products that would keep Vox an industry leader for the next several years.
Top Boost
The AC30 continued to evolve with the introduction of the AC30/6 in 1960, which added a Brilliant channel to the standard complement of Normal and Vib-Trem channels, increasing the number of inputs to six. This change also involved swapping the original EF86 pentode tube to an ECC83 (12AX7) twin triode. It has been said that the AC30/6 lacked some of the clarity of the original model, and that’s ostensibly why Vox responded with its Top Boost “brilliance” modification in 1961. This comprised a plate of bent aluminum gripping an extra 12AX7 tube along with Bass and Treble controls, which was mounted into a square cutout on the back of the amp, and wired into the main circuit. Initially, the Top Boost mod could be ordered separately, or be factory installed on the AC30/6. In 1963, the extra circuitry was incorporated into the chassis, and the Bass and Treble knobs were added to the control panel (the add-on unit was still available, though).Despite its comparative simplicity most customers didn't have the technical knowledge to fit the new circuit and consequently the Top Boost, or 'Brilliance Unit' as it was officially named, was fitted to the AC30 as standard from 1964 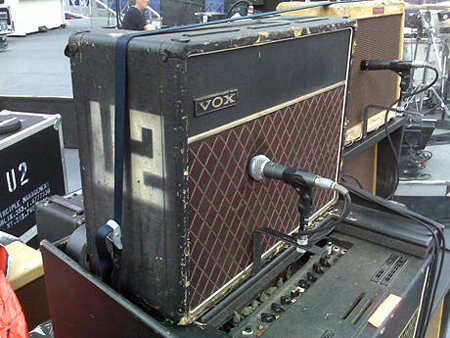 The Edge created a signature sound early on in his career with a Fender Stratocaster, Electro Harmonix Memory Man delay pedal and a VOX AC30 on albums such as WAR and The Unforgettable Fire. This winning combination has served him well from the early days all the way through recent records and live work. The Edge creates complex echo manipulations coupled with the airy chime of the Vox AC30. The Edge has used a massive catalog of guitars and multi FX units over the years, but the AC30 has remained a staple regardless of the other changes. These gear details coupled with his brilliant parts make U2’s catalog of songs distinguishable with just one note of the Edge’s guitar. Very few guitar players in history have created such a powerful and recognizable signature sound like The Edge. 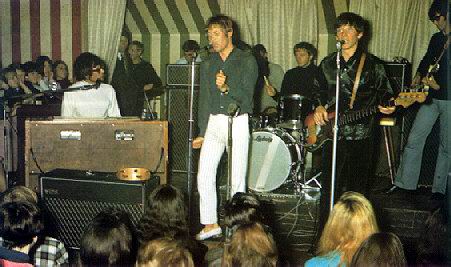 VOX AC30 '65 This was the model used by THE SHADOWS for their greatest hits,and many guitarists admitted to being puzzled when their Fender guitars did not give exactly that result through their newly bought AC30s, which were mainly six-input model by mid-1961(The Vox Story) 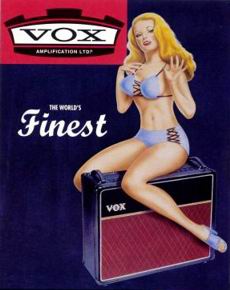 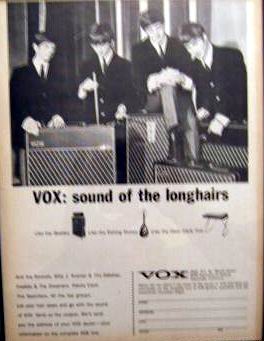