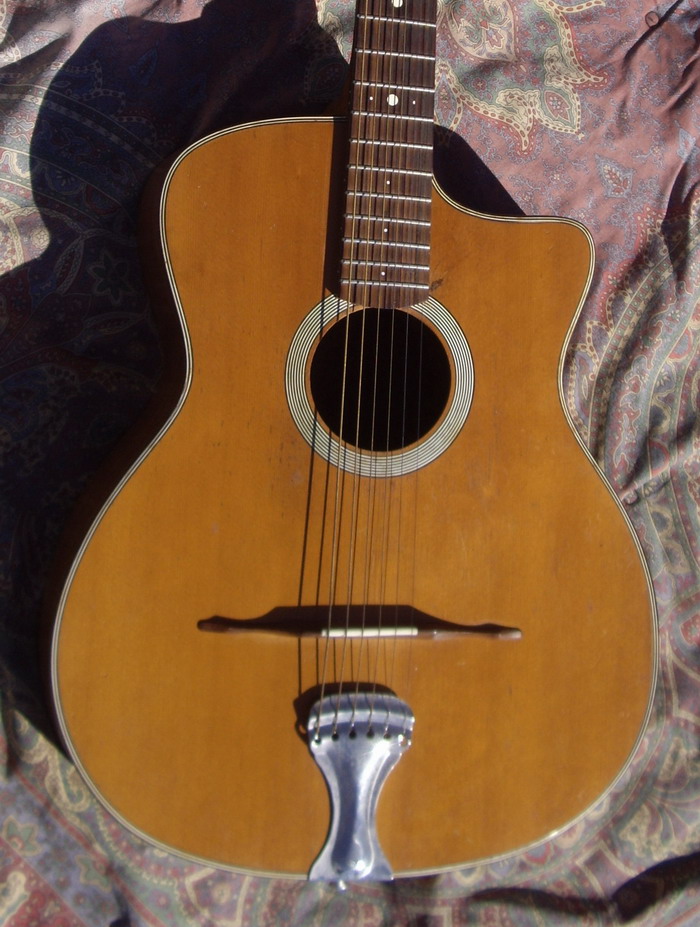 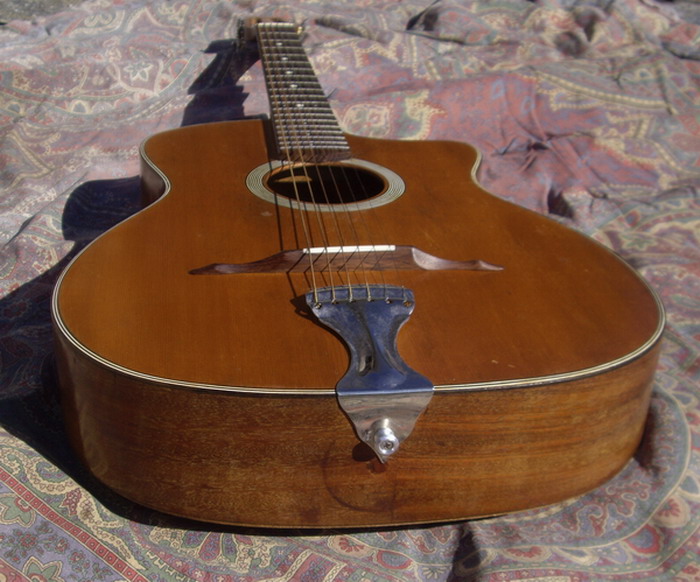 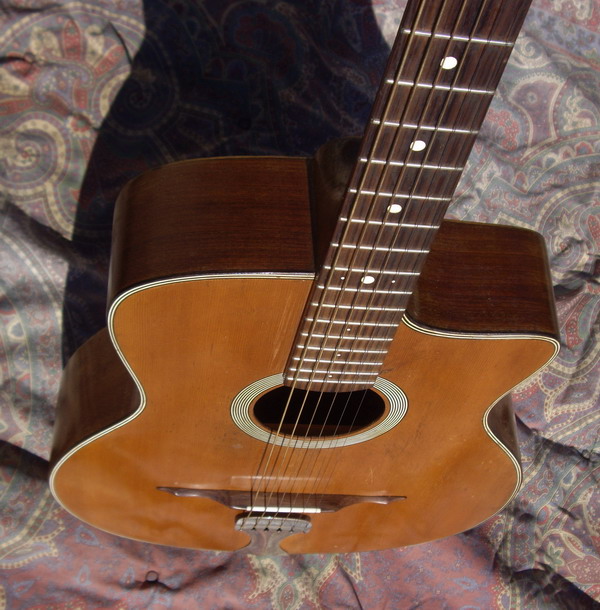 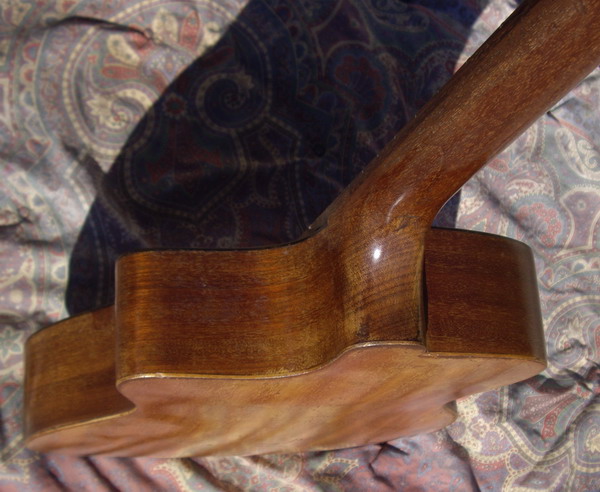 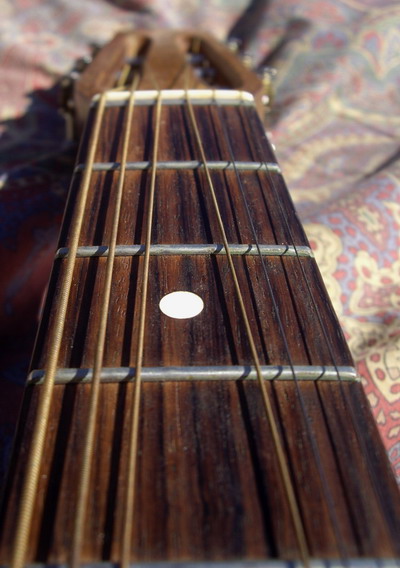 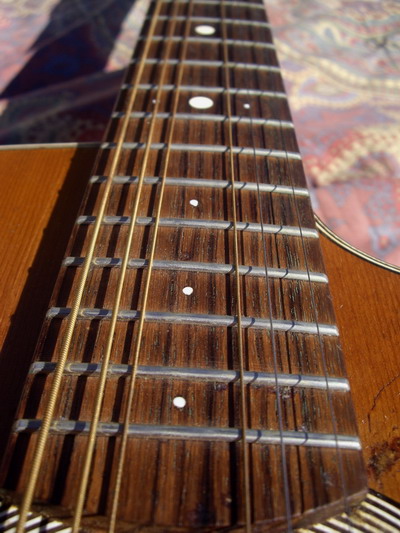 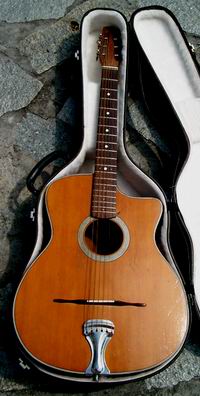 This Antoine di Mauro model, has the Round Soundhole instead of the customary D or Oval hole.12 Fret, standard 650mm scale. Mahogany neck with Rosewood fingerboard, Solid Spruce Top, Laminated Mahogany back and sides, with the “Marque au Fer” on the back of the headstock.Replaced tuners and tailpiece. This guitar has the Gypsy bark, perfect guitar for the “Pompe”.You will never find this kind of sound coming out of a modern guitar. Regardless who makes it.!!!Comes with a modern hard case.

Apart from the extremely rare and valuable original Selmer/Maccaferri instruments, authentic French guitars intended for the Django-derived Gypsy Jazz style are very little known in the US. While the original Selmers-the "gold standard" of this type of instrument-are currently reproduced by makers all over the world today, many native builders in France have since the 1930's created their own itinerant variations of the design. Antoine Di Mauro was one of the earliest and most celebrated French luthiers to market his own Selmer-style guitars, beginning in the mid-1930's. Di Mauro guitars were played and heard alongside the more expensive Selmers in the cafes and theatres of Paris from well before WWII, and earned a reputation as fine working player's instruments. These Di Mauro "Manouche" guitars, alongside Busatos, Favinos and Geromes and of course the original Selmer/Maccaferri design they all descend from constitute the most interesting and distinctive flowering of French lutherie in the 20th Century.

Antione Di Mauro was born in 1900 in Catagne, Italy, eventually settling with his family in Paris in 1932. Like a number of other Italian luthiers he was soon operating a successful guitar building shop, soon including two of his three young sons. The Di Mauros built many types of guitars and other stringed instruments but were especially renowned for their several distinct models based on the Maccaferri design. Antoine died in 1975 but the Di Mauro shop continued into the early 1990's under the management of his son Joseph before closing for good in 1993.

During the 1930s, the guitar was played by such popular musicians as the singer Tino Rossi, and a jazz artist like Django Reinhardt took it to the highest level of esteem and created a demand which was satisfied by the new luthiers who came with the cabinetmakers from Italy to Paris during the 20s. Some of them came from Catania, Sicily, a manufacturing center which furnished a lot of cheap instruments for the popular music market. The first to open a workshop in Paris was V. Jacobacci whose workmen were to become many of the luthiers of the future. These new arrivals were named Pappalardo, Di Mauro, Amico, Anastasio, Busato, Bucolo, Castelluccia, Favino, Oliveri, Burgasssi, Martella, Grizzo, Rossito, Petilio, etc. They built mandolins, banjos and guitars in large quantities. They worked hard and produced very fairly priced instruments. Some of their sons, like Pappalardo, Favino, Anastasio and Castelluccia, still carry on their family enterprises today. One of these emigr�s had a remarkable international destiny. His name was Mario Maccaferri, born at the beginning of the century near Bologna. Having studied guitar playing and guitar making with Luigi Mozzani in that city, he moved to Paris in 1919, then to London (according to Tom Evans) and began a career as guitarist, luthier, engineer and business man. Around 1930 he developed three guitar models for the French firm of Selmer: classical, jazz or orchestra, and Hawaiian. The classical and jazz models had a unique appearance and featured a large cut-away on the upper bout so the left hand could easily reach the highest notes. Classical guitarists did not adopt that feature, but jazz players made it a great success, Django Reinhardt first and foremost. The production of these guitars by Selmer lasted only a short time because of a disagreement between the two partners. The design eventually entered the public domain and was taken up for many years by the Italian luthiers of Paris. Just before the Second World War (1939-1945) Maccaferri emigrated to the United States and started a successful company that made clarinet and saxophone reeds. Shortly after 1954 he invested a lot of money in the manufacture of plastic guitars which were cleverly designed and very affordable, but they proved to be a failure. However, his ukuleles made of the same material became a huge success and more than nine million were sold. 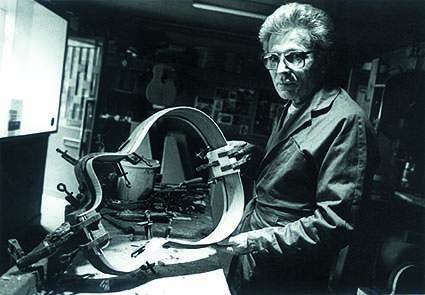 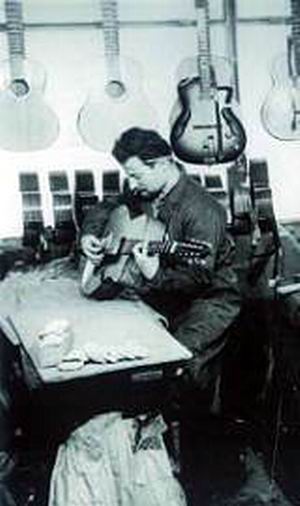 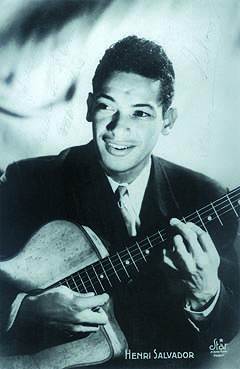 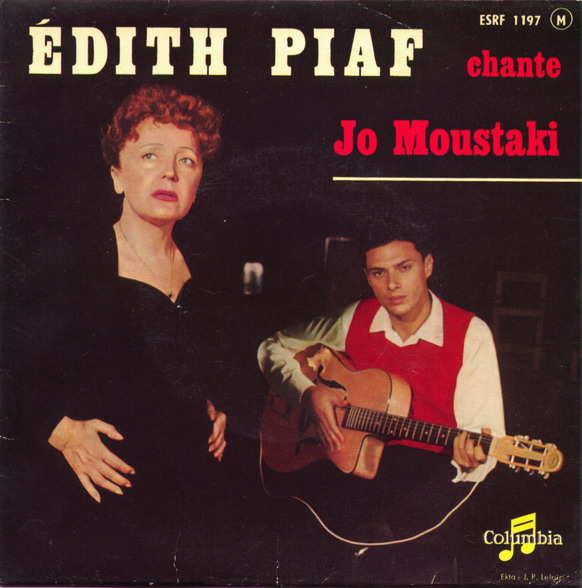