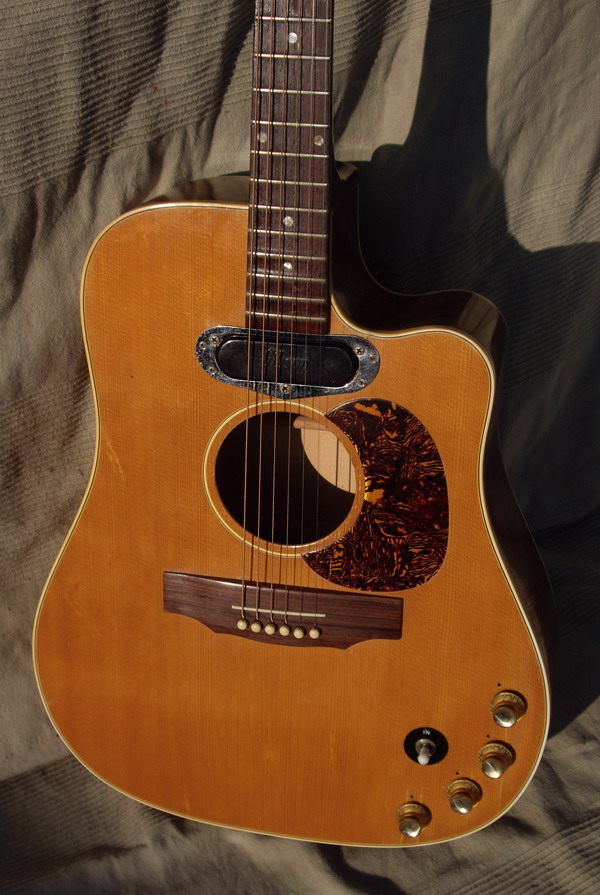 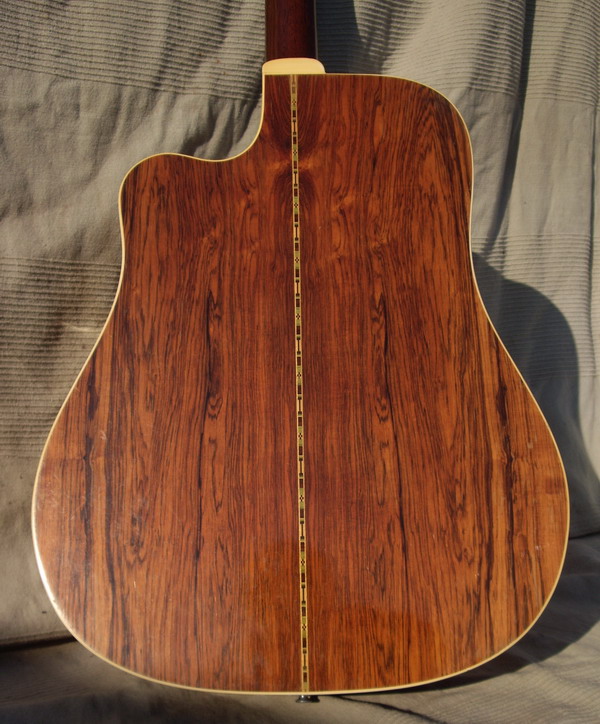 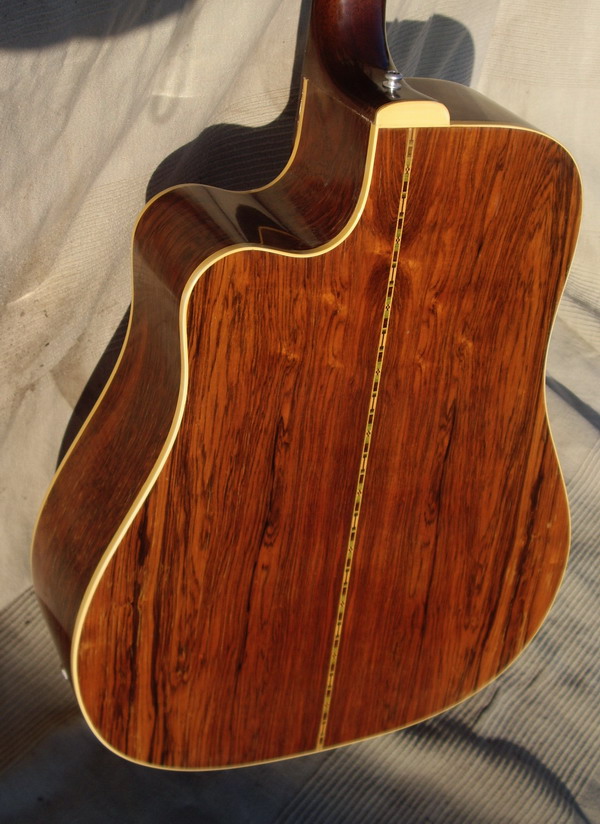 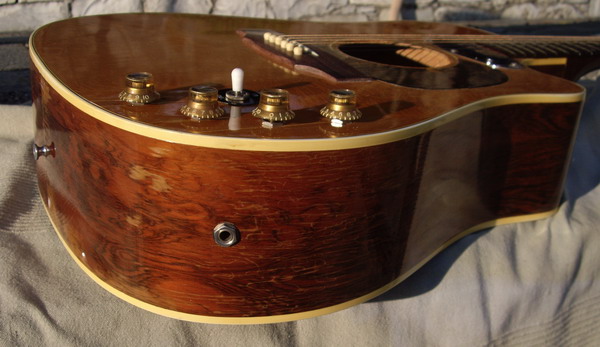 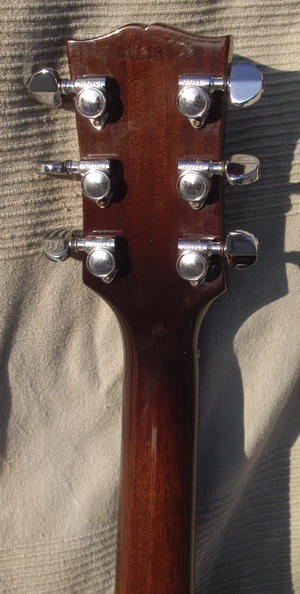 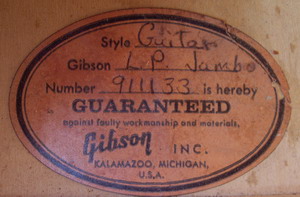 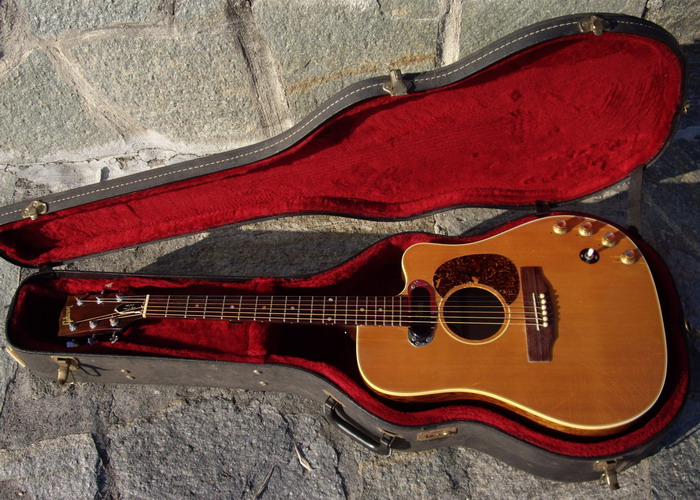 From my personal collection

Shortly after the re-introduction of the Gibson Les Paul Model in 1968, a series of unique Les Paul guitars with Low Impedance pickups was introduced. The Les Paul Jumbo is arguably the most unusual of them, and a very rare bird indeed!

Let's take a look at the acoustic guitar first:  The back of this example is made of bookmatched pieces of Braz. RW, showing a beautiful natural grain. The seam is nicely ornamented. The sides are made of the same wood. The neck is 3-piece mahogany with no volute, and there is no veneer applied to the headstock. The six-digit serial number is very lightly stamped into the wood, as is the "Made In USA" script. No Les Paul decal is applied to the front of the headstock, and the Gibson logo is silkscreened. Other examples have been seen with stenciled Gibson logo and engraved truss rod cover. It is possible that this example has lost its original engraved truss rod cover, but since the applications on this guitar differ somewhat from other sightings of the elusive Jumbo, this truss rod cover might very well be original. The tuners are Schallers, with a capital "G" logo. The bridge is highly unusual for acoustic guitar bridges: two metal screws on either side if the adjustable saddle section allow for very easy adjustment of the action, very much like the wheels of a tune-o-matic. The saddles, although carved individually for intonation, are not adjustable. (Note: there are some examples around with the more traditional un-adjustable bridges). The black pickguard of this guitar is highly unusual for a Jumbo - the standard edition was tortoiseshell.

And now for the electronics: The Jumbo is a member of the Les Paul Low Impedance Family (its solid body brothers being the Personal, the Professional, and the Recording; there was also a semi-acoustic version called the Signature). Its single pickup is located right between the end of the fretboard and the sound hole, mounted in a right angle (not slanted like on the LP Personal) on an oval-shaped chrome ring. The pickup is designed to produce a very clean, noiseless, and undistorted sound. It requires an external impedance converter to be operational (Note: most lo-z Les Pauls available today have lost their original converter cables, but modern converters for microphones will do the job). The electronics were largely inherited from the Low-Impedance Les Paul Personal guitar: a single, oval lo-z pickup with black, Gibson-embossed cover, toggle switch, and four controls for Volume, Decade, Bass, and Treble. The familiar-looking toggle switch is anything but familiar: it has only two positions, and the black switch ring is labeled "In" and "Out". The switch effectively bypasses the bass and treble controls. The knobs are gold reflector knobs, although the Gibson catalog also showed an example with black reflector knobs. The Decade Control offers 11 different tone presets: position 1 emphasizes the higher frequencies while the higher positions add bottom end to the sound.

About the sound and playability: Les Paul's own style of playing was heavily influenced by the style and the guitars of Django Reinhardt: big-bodied acoustics with a rounded cutaway. Consequently, the Jumbo is constructed to give a deep, booming sound with very well articulated highs. It can be set up for fast, single-note soloing, its cutaway giving easy access to the higher registers.

To modern ears, the Jumbo's electric sounds are refreshingly different from the piezo-pickups prevalent in modern "electrified" acoustics - no preamps on board, and therefore no batteries that can fade, leak, or die in the middle of a gig! The electric sound offers additional midrange and sustain, and interesting sounds can be mixed when miking the sound hole for an acoustic sound, plus picking up the signal from the electromagnetic pickup.

Imagine yourself back in time - the early 1970's: the Les Paul sounds of that era were recorded for posterity on albums like Led Zeppelin II, Beck-Ola, Free's Fire And Water, or the Allman Bros. at the Fillmore East. Can you name any equally significant albums of that time that recorded a clean, undistorted guitar tone direct into a mixing desk? Well, that tells you how unpopular low-impedance Les Pauls were then, and how undesirable this unwanted stepchild is now, relative to its humbucking and P-90-sporting siblings. But if you appreciate all the Braz. RW that went into the Jumbo guitars, and all the workmanship and tonal variety that the Low-Impedance models have to offer, you will (like I do) appreciate and cherish the black sheep of the Les Paul family! ©2006 Werner Goertz 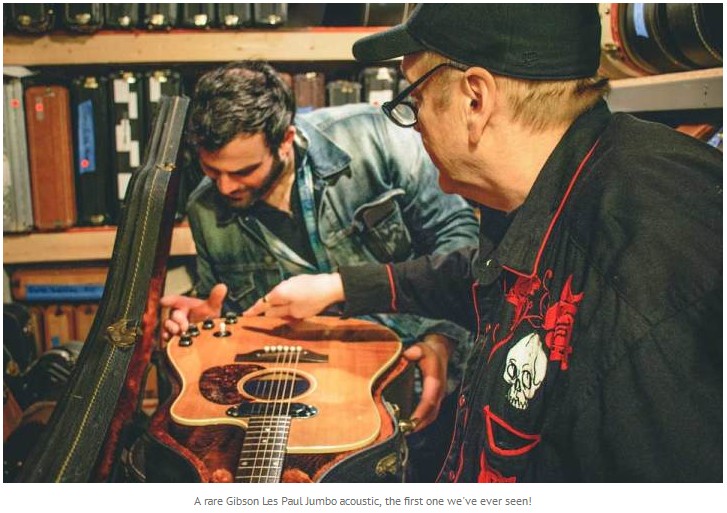